I’ve seen the world, lit it up as my stage now
Channeling angels in the new age now
Hot summer days, rock ‘n’ roll, the way you play for me at your show
And all the ways I got to know your pretty face and electric soul… 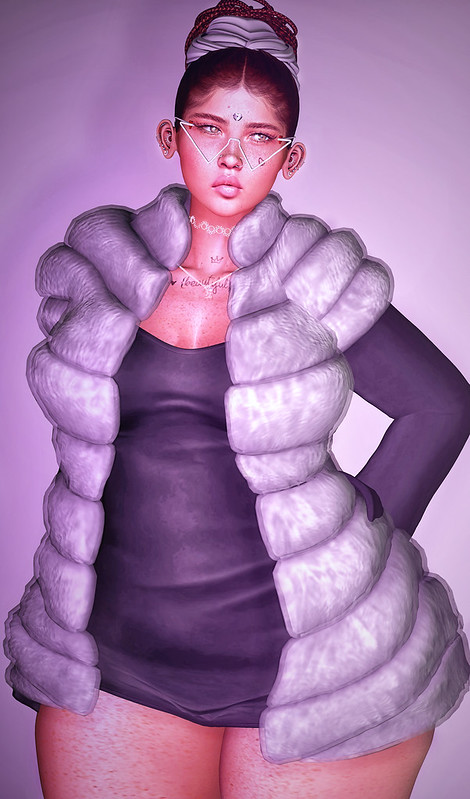 Today’s post is going to be a little bit heavy.  If that’s not Y/your thing, then i understand.  Just wanted to give Y/you a heads up before Y/you click for more.  🙂

i’ve heard multiple P/people talk about their insecurities, especially lately, and one of the things i hear a lot is, “You can’t say anything to me that’s worse than what i say to myself.”  Of course they’re referring to negative self-talk and other similar things, but i couldn’t help but think about what they’re saying.  Words hurt, and while some might feel like they’re negative self-talk is worse than anything anyone could say to them, that is not the case for me.

Humans are incredibly cruel to each other, needlessly.

For today’s post, i decided to show Y/you all one of my insecurities, and talk a little bit about it: my weight.  Now, obviously my avi still looks pretty good when thickening her  up like i tried to do.  It’s almost impossible to make an unattractive avi body, but i tried to be representative of a bigger girl that doesn’t have all those curves that make you think more, “Damn she thicc.”  i don’t think i succeeded too well, but bear with me anyway.  Know that i was going more for the ‘blob’ shape, without distorting the beautiful mesh from Cynful.

i am a bigger girl in RL.  Much bigger.  And i know a lot of P/people say that and Men in particular laugh it off.  Most of those bigger girls still have an attractive curve to them, so it doesn’t make the size that much of an issue, and most of the ones i know still are able to develop loving, happy relationships in their RL where there is a physical attraction as well as a mental connection.

Cause you enter into something in SL… that’s all well and good.  But as soon as it looks like it might take a step towards something in RL?  They want to cam, even just to chat?  They want to facetime?  They want to treat it like a face-to-face relationship?  i get scared.  Sure, i have a picture in the RL tab of my profile, but that’s controlled.  i chose to share that.  Someone seeing me at my worst days as well as my best?  Nah, fam.

i’ve always been bigger.  i wouldn’t find out until i was in my early 20’s most of the reasons why it was always so hard to lose weight despite how active i was in middle school and high school.  (Y/you might laugh when a fat girl calls herself active, but i legitimately was.  i played Softball all as a kid until middle school, and in then in middle school i did swim team.  Starting in 8th grade i did marching band, and starting freshman year i did winter drumline.  All through high school i was in theater and robotics, and when i’d get stressed in robotics i’d literally go run laps around the parking lot with my best friend.  i was active.  lol.)  But i’ve always been bigger and always been teased about it.

But when my dad died?  i just kinda stopped caring at all.  About anything.

i wanted to die.  i know that sounds melodramatic, but i really, truly did.  Not even for some emotional reason like i wanted to be reunited with my dad.  i was just so alone, and i couldn’t take it.  The same week my dad died, my mom and step-dad moved 12 hours away across multiple states and i was left alone in my hometown with not a lot of friends, not a lot of connections, and i’d just left my job to work at home because i’d been hit one too many times by a violent client that they kept trying to make me work with.  So i didn’t get out much, i didn’t socialize much outside of SL, and my mother still constantly guilt-tripped me for playing SL when she knew i did.

This was 6 years ago.  About the time that i built my own computer with better graphics and started taking my blogging and photography more seriously.

But i still wanted to die.  i attempted once… wanted to a couple more times… and thought about it plenty more than that.  But i was just too scared to go through with it 100%.  In hindsight, that’s a good thing, and maybe it was my subconscious desperately trying to get me to see that there was something else more to live for, even if i couldn’t see it yet, but my failed attempts or hesitations just made me even more depressed.

That’s when i stopped caring about my health all together.  The way i saw it was i’d either eventually get brave enough to actually go through with it and succeed, or my body/health would simply do it for me.  i’m not sure if any of Y/you have ever felt that way before… but it’s a very dangerous way to feel.  It’s so easy for your health to worsen when you start ignoring your body’s warning signs, stop taking all of your medications, stop caring about what you put into your body… it requires zero effort to completely fuck your health up, and that was the reassuring part for me.

i didn’t have to do anything complicated.  i didn’t even have to be brave.  i just had to not care.  And i didn’t.

About 3 months after my dad died, right after my first attempt, i had a bit of a full-on breakdown, got evicted, and moved down to be closer to my parents and grandparents to have that kind of a support system.  Despite that breakdown, i didn’t actually wind up in a hospital or anything – so when i say that a couple months ago was my first hospital experience, i’m being truthful.  But i did have a breakdown.  i did move to be closer to family because i didn’t trust myself to be alone anymore, and my family didn’t trust me either.

Mom would spend the next few years making subtle pleas to me to change my habits, and i would smile and nod and promise to try, to placate her, but i still hadn’t changed my mind about wanting to die.  i didn’t tell her that, though.  In hindsight, i should have.  Maybe i could’ve gotten to this point a lot sooner, and avoid some of the worst shit, but i didn’t.  i was afraid to burden her – she’s experienced so much death in her life, how could i, her only daughter, tell her i wanted to die and that i was letting my health deteriorate in order to do it because i was too chickenshit to kill myself?  Like how do you have that conversation?

It wasn’t until about 6 months ago or so that i finally decided i DID want to live.  i don’t know what happened, what triggered it, what it was that finally made my brain decide to recognize all of the things that are worth living for in life, but whatever it was… suddenly i didn’t want to die anymore.  But now there was a new thing to be afraid of…

How much of what has happened to my health can actually be fixed?  What if it’s irreversible?

And that is currently where my brain is sitting.  My weight and my size and my health are all huge sources of anxiety for me… and so don’t think that nothing you say can be worse than the things i say to myself… because they very much can be.  i’m working on POSITIVE self-talk… i’m encouraging myself… i’m reminding myself every day that life is worth living and that we can fix this as long as we keep doing the things we’re doing and going down the path we’re trying to go down.

Literally ANY cruel thing Y/you can bring Y/yourself to say is worse than what i’m saying to myself right now.  So please remember that when Y/you’re talking about others.  Y/you don’t know what battle they’re fighting.

And Y/you don’t know how close they are to giving up.