You make it sound so pretty, even when it’s not
Didn’t choose, but it’s the only one we’ve got
And sometimes i get so tired of getting tied up in my thoughts
You’re the only one who ever makes it stop… 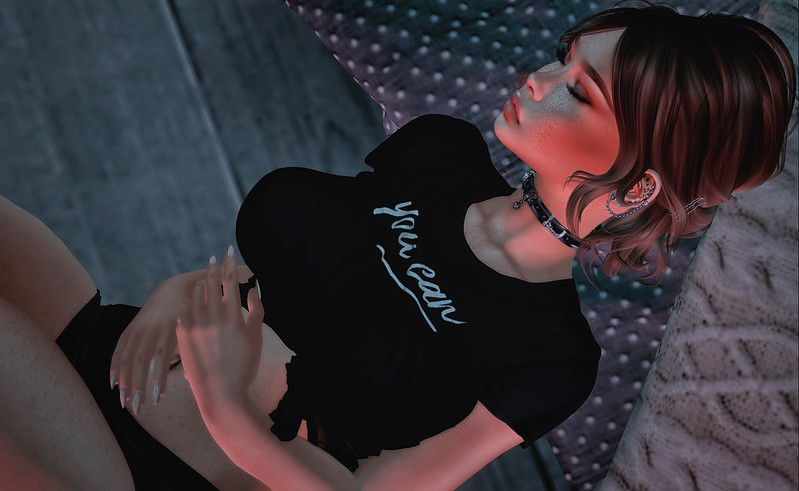 Today, i want to acknowledge 2 amazing people.  They aren’t ‘friends’, in a sense – at least i don’t know that i’d call it that.  Maybe they would and i’ll feel like an asshole for saying that.  Lmao.  But these are two people that, whether they know it or not, managed to make my day this week.

The first is Harley Heliosense.  The story of HOW she made my day is a hilarious one, and i hope she won’t mind me sharing it.  It still makes me giggle thinking about the timing of what happened…

i was sitting, chatting, and hanging out with a new-to-me Dominant and friend.  Just casually chatting – which is what made this so out of the blue and weird.  Lol.  He happened to find my spanker, and had a good time poking fun at me about it and the cheeky message that pops up in local when someone spanks it.  But after a few moments of that, a collar delivers to me randomly, from [Tethered].  o.O  Now, this isn’t a collar i’ve had in the past, so i knew it wasn’t an update.  The first thing i did was raise an eyebrow… and when i say raise i mean like… if my eyebrow could’ve left my face, it would’ve gone through the ceiling… because anything i knew about this Guy told me He wasn’t the kind to just be like, “You, girl.  Wear collar now.”  So i looked at the Caspervend delivery message, and i was correct, it didn’t come from Him.  It came from “some guy” named Torus Heliosense.  (In quotations because that was my thought process.)

i click on His profile, partially to figure out who the hell He is, and partially to message and see if He had the right person.  My dumb ass quickly sees that He is the CREATOR of [Tethered] – something i admittedly should’ve known, but didn’t.  Lol.  i’m still curious at this point, though, and just as i’m about to IM Him, a box pops open from Harley Heliosense, His partner.

i pause what i’m typing, to see what she has to say.  It turns out, she had just read my last post, about my dad, and thanked me for being so candid in my blog.  She wanted to send one of their updated collars as a little gift.  Since it came from her partner’s account, a male, she wanted to message me to make sure that i didn’t think “some random Dom was trying to collar” me or anything.  Lmao.  Girllll if you only knew how much ran through my head in those, like, 30 seconds.  i told her about the Dominant i was sitting with and we both had a good giggle at the timing of it all.

[Tethered] has always had intricately detailed collars, but once Avatar Rendering Cost and Complexity became a measurable value in SL, and something P/people bitched about, i found the prim construction to be cumbersome, and the designs made to fit system avatar necks to be difficult to fit to a mesh body.  So i was super excited to hear that they have not only updated some of their older designs to be more easily fitted to mesh body necks, but they’re going to CONTINUE to update most if not all of their older collars to the new fit, and continue to create NEW products…. some of which will be in MESH.  Y/y’all… if this Man can manage to do in mesh things that are even half as beautiful as His prim collars were and are… look out.

So i had to wear the collar that was gifted to me in today’s post as a thank you to her for making my day, and also to show Y/you all the pretty!

The second person that has managed to make my day this week, is Blueberry.  In case you live under some kind of rock, Blueberry is the creator behind her original mesh clothing brand of the same name.

W/we all live for Blueberry clothes… the impeccable fit, the gorgeous texturing, the consistent releases, and the way she listens to her customers and not only is super interactive, but tries her damnedest to incorporate the things that P/people ask her for if they are at all possible.  If she can’t, she explains in SO much detail why she can’t, or that she tried and xyz thing happened, making it unable to happen.  i often say, just generally as well as to her in conversation, that she is far too pure for this world.

But how she made my day this week, Thursday even, was a particular pattern in her newest set, Noelia.  i know… a pattern shouldn’t put me in my feelings.  Bear with me.

W/we all know that Blue’s patterns are often unique to whatever thing she is creating – she doesn’t really have ‘standard’ patterns.  It all depends on what works with what she’s creating.  She’s not going to put out something that looks less-than-perfect in her eyes.  So it’s always a little bit of a surprise to U/us to see what all patterns exist with a particular thing.

After seeing a Gucci-inspired pattern in a blog post, i knew i was going to love the shirt patterns.  So much so that i actually took OFF the dress version i was wearing to unpack the shirt and shorts to see what the patterns were.

Now at the same time, i’m casually having conversations with friends, you know, the usual.  i had just gotten done typing to a friend, “i’m not sure if i can…” referring to a decision i’ve been weighing in my mind recently.

So of course, what the fuck do i find but the pattern i photographed today, reading simply “you can”.  i could have cried.  i did cry.  It was a whole moment.

That’s not to say that Blue somehow knew telepathically that that is what i needed to see and created that pattern just for me.  No, that would be silly.  Lol.  But it’s just interesting how the Universe works sometimes.  It puts P/people into Y/your path when Y/you need T/them… takes T/them away when Y/you don’t.  And sometimes it does things like this.  Little, seemingly insignificant things that become so profound in the right moment.

So this post is a little (ok… a bit more than a little… W/we all know i ramble..) thank you to Blue and Harley.  For making this week bearable.  ♥

(Speaking of the Universe’s timing, tell me how an update of a [Tethered] collar i purchased in the past just got delivered to me as soon as i finished this post.  Lol.  i tell you, Sir Torus is on His grind!)

One thought on “Confession .268. Sometimes I Get So Tired Of Getting Tied Up In My Thoughts…”