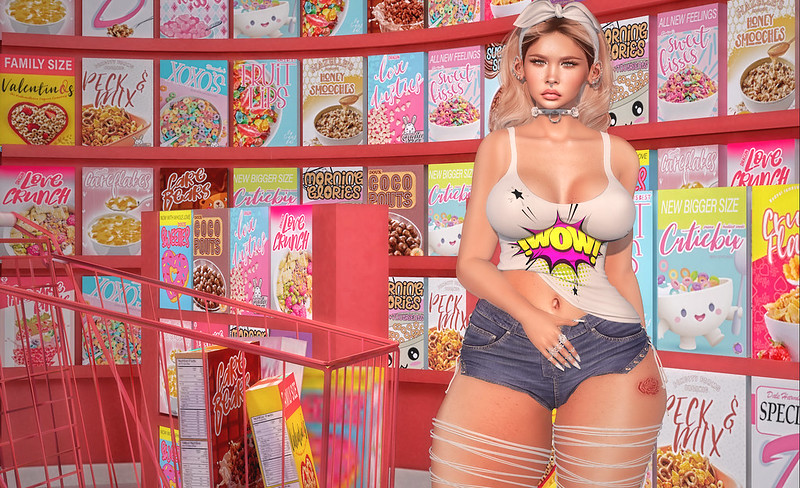 i’ve been avoiding talking about Azuri – like i said before.  And after attending her memorial today on her sim (a beautiful gathering, by the way), i think i might be somewhat able to try and express myself.  If Y/you were at the memorial and Y/you’re reading this, Y/you’ll see a lot of what i said, along with some things i meant to say peppered in.

First of all, i recognize that this photo isn’t very, like… memorial-y.  This is me pretending that i’m ok.  This is my TRYING to be ok.  Because i know she would want me to be.  Also, this is me indulging in all the sugary snacks that she and i both weren’t allowed anymore, for varying reasons.

Azuri and my’s relationship was the actual physical manifestation of a roller coaster.  She became a fast friend, a close sister, an enemy, and then a sister again.  When i first met her, i was still brand new to the Lifestyle for the most part.  i had just come out of a long-term collar with a Gorean Master who was ill in RL and just stopped logging in.  But i didn’t know anything really about non-Gorean D/s.  i had been new to D/s before i wandered into Gor at the suggestion of a friend, so i came out just as new and ignorant as i was before.

i met her and her then-Master at a club that i helped run, not in any official capacity, but i was part of the Education committee for that sim and so i’d like to think i was involved in the running of the important side.  -laughs-  We became fast friends, and it wasn’t long before she was bugging her Master to Mentor me.  Something she saw in me, i guess… and she wanted to be sure i got a good start.

They took me to the first D/s education-focused sim that i had ever seen, let alone been to: Solace of Submission.  i got to meet the wonderful P/people there, and Azuri made sure i met the right P/people and got hooked up with a community that was going to be healthy for me to learn in and be a part of.  But what began as Mentorship between myself and her Master grew into more, and eventually i became her chain sister.  She… didn’t like that.  (Don’t worry, i’m not here to speak ill of the dead.  The negative part of this story is funny to me, and i remember it as a positive memory that she and i laughed about together afterwards.)

i remember logging online one day into the home W/we all shared – myself, Azuri, our Master, and His wife/submissive.  They were arguing in voice, and it didn’t take long for me to figure out it was about me.  i was significantly younger than He was, and she was about the same gap older than He was, so there was a big gap between us.  That and i was an immature shit, so i was pretty hard to get close to, relate to, deal with, etc.  i’ve grown a lot since then – and most of that growth i owe to her, but i’ll get into that in a bit.  In exasperation, Azuri opened her mic and screamed, “I HAVE SOCKS OLDER THAN HER!”  It was very clear she felt the age gap in the family was inappropriate.  In true, young-Tivi, immature, sarcastic fashion, i opened my mic and said, “i’m sorry you haven’t bought new socks in 21 years!” and promptly tp’d out.

From that point, i thought it was doomed.  Our friendship was pretty much in shambles, stressed by the changing dynamic and trying to figure out how to serve the same Master.  We were both much different people back then.  Azuri was much more insecure, and i was much more immature.

Fast forward a year or two, we were both out of that relationship and we began to re-forge our friendship over a mutual love of dance and her desire to learn.  That wall was busted down quite quickly and that friendship and love we both knew could be there came rushing back.  That woman became one of the only people in SL that does not share a collar with me that i will still call ‘sister’.  And i can count those people on one hand.

Azuri was my voice of reason, my filter.  She was my bullshit detector when i lacked the ability to see a situation clearly.  She was everything a sister could be,and then some.  And i know she wasn’t just that way with me.

That was the thing about Azuri – everyone had a place with her.  No one every felt left out, on the outsie, ostracized, or unwelcome around Azuri.  i don’t think she could ‘snub’ anyone even if she actively tried.  And i know she tried with an ex of mine.  She always took her role as an ambassador for her sim very seriously and was always the first kind face and voice that would meet any newcomer.

She was someone i look up to, when it comes to being welcoming and accepting of everyone.  It is her spirit of openness that i try to take with me as i continue to try to grow into a better version of myself.

Which is why it’s so hard for me to reconcile within my soul that she died alone.  The one person in my Second Life who has always made the effort to make sure that no one ever feels alone – that everyone always has a place to call home and a place to belong… she died alone.  For someone who had such a hard life and overcame so much, the Universe truly did her an injustice in that.

i don’t know what i will do without that voice of reason in my head.  Some of our fellow ‘brat pack’ from back in the day have offered to be such, but the fact remains that i will always have an Azuri-sized hole in my heart that nothing and no one else can fill.

i’ve had a love-hate relationship with religion for the longest time, but part of me has to believe that there is some kind of Afterlife that Azuri is enjoying… because i have to believe that there is a way i will see her again someday.  There just wasn’t enough time.  And i’m certainly kicking myself for not reaching out as much as i should – not giving back to her as much as she gave to me in love, support, and kindness.  And so i guess i just have to vow to pay it forward to other P/people, what i didn’t get to repay to her.

Because Y/you never know when it’s the last time.