I got a song filled with shit for the strong-willed
When the world gives you a raw deal
Sets you off ’til you scream, “Piss off! Screw you!”
When it talks to you like you don’t belong
Or tells you you’re in the wrong field
When something’s in your mitochondrial
‘Cause it latched on to you… 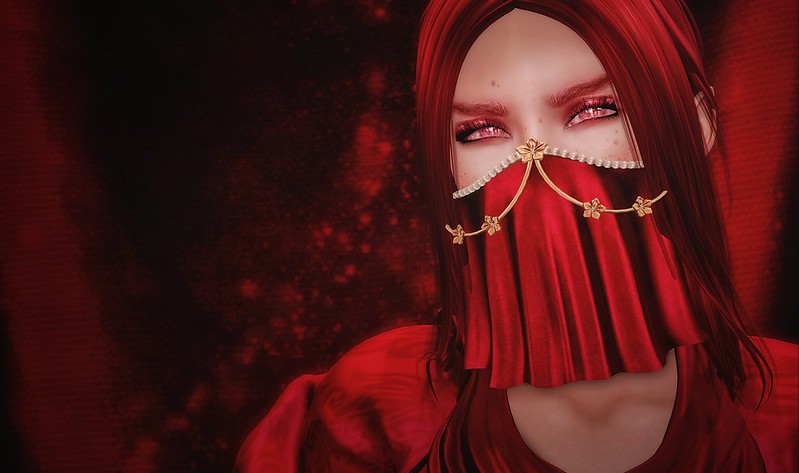 Here’s your advanced warning that i’m also blogging this tune tomorrow.  It’s been stuck in my head for days now, and i did today’s photo with it in mind, however, i’ve also got something in the works with some Sweet Thing awesomeness that makes me think of this song too… so… you get it twice in a row.  Sorry, not sorry.

This outfit was a bit surreal for me.  Mentally, i just lost some of you to the premonition of, “It’s just clothes, Harmony, what are you talking about?” but some of you know exactly what i mean.

i’ve been in Gor off an on since about 2009 – across various avatars.  The only time i ever played a Free Woman (Gor’s closest equivalent of a female Dominant) was when i was using Goreans in Second Life as a Cultural Anthropology case study and wanted to make sure that the treatment i was experiencing from people wasn’t just because of my status as a slave, and was, in fact, because i was female in general.  At that point, i was running a female slave and a Free Woman character – but when i was done with that class, i deleted the Free Woman avatar and just stuck with my slave.

Because playing a Free Woman just never was my thing.  It’s not my natural disposition – and i get the concept of “roleplay” allows you to play something outside of your norm, however, i tend to draw from life experiences for any of my characters and i just couldn’t relate to a Free Woman.  i tried again a few years ago with my ex… and it just never went anywhere.  i couldn’t get into it.

So donning a face veil again was very… surreal, like i said.  Lol.  Even now, looking at the photo while i’m blogging is like, “Who is that?”  It doesn’t even look like myself to me, because it’s a concept so foreign to me.

Some of Y/you disagree.  Y/you think i Top from the bottom, or whatever other accusation Y/you use to appease Y/yourself about why interactions with me have been negative.

My Venom is my defense mechanism.  Sometimes Y/you just have to build up a tolerance.  But that’s a matter for tomorrow’s post…