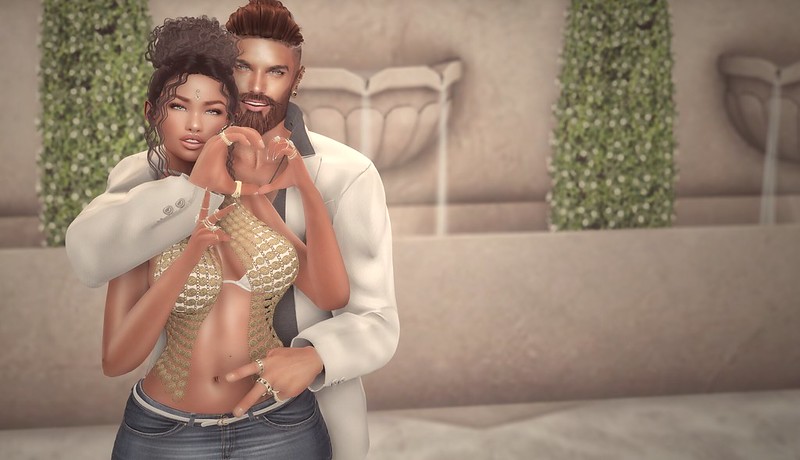 I feel like I take small breaks, or mini-hiatuses (Is that a word?  If not, it is now…) a lot – or a lot more than one should.  But lately, RL has been kicking my ass.  If you’re not here to hear about RL, see you next time, scroll down so you know where to get your pretties from!  ♥

Those who are close to me already know – my cousin was sick for a long time, with a rare disease that is thusfar only in my family and one other.  We’ve known she was sick since she was in her mid-twenties, and now, at the age of 42, she has passed away.

Knowing for 17 years that this is what was going to happen, didn’t make it any easier.  And knowing how close my mother was to this cousin in particular doesn’t make it any easier either.  This was the oldest of my cousins, so it was my mother’s first experience of helping take care of a child…

Mom told me this story of when Angie was born… she and her brother an her brother’s wife still lived at home with their parents, and the way the house was setup, my uncle and aunt’s room was on one end of the house, and Angie’s room was on the other end, closer to mom’s room.  So whenever Angie would cry in the middle of the night, it was usually mom who woke up to sooth her and take care of her.  Those interactions with Angie in the middle of the night, and how deeply mom wound up falling in love with her was really what made mom want kids when she was older.

In fact, if it hadn’t been for our family’s disease, mom probably would’ve had me sooner than she did.  She’d gotten tested, and was negative, but she just wanted to be 100% sure.  The onset of this disease usually begins with seizures, and starts around age 25.  Mom waited until she was 27, to be sure she was seizure-free.  But never did she doubt that she wanted children.  Not after her experiences with Angie.

And the more I’ve heard mom talk about Angie over the last couple months that she’s been gradually getting closer to this moment… the more I realize I owe a lot to her.  I may not be here if it weren’t for Angie’s existence… if mom hadn’t fallen in love with babies early on, who knows how she would have felt about having children one day… she may have waited, put her career first… and I may never have came to be.

Though she was the cousin I saw the least, because she was the oldest, I feel like I have this innate connection to her now.  So her passing has hit me harder than I expected it to.

Anyway… I won’t be blogging while I’m traveling for her funeral.  I will be leaving the evening of the 25th and I won’t be back until sometime on the evening of the 30th.  If I can manage to be productive during the day tomorrow (the 25th), then I may schedule a post to come out on the 26th, but after that, I won’t be doing any blogging until I get home – the 31st at the earliest.

Thank you to those of you who have stuck with me, and who entrust me with your creations.  You mean the world to me, and I try to do my best to make you happy with the work I’m doing.  Thank you to family and friends who have been there to be supportive during this time.  And thank You to Magnus, who literally puts up with the brunt of my shit lately, and tries to make sure I go to bed at a decent hour – which, for those who know me, know that’s no small feat!