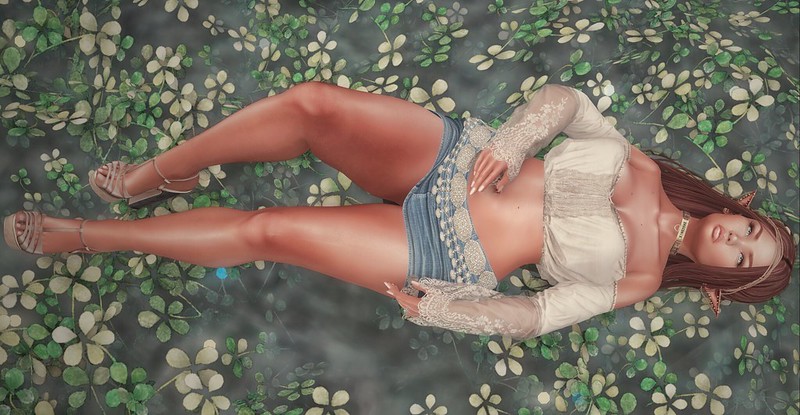 I took this at the wedding sim before I had to take it apart.  So allow me to have a bit of a nostalgia moment.

Today, I was made privy to a conversation that a couple of people had about me, regarding my relationships, and my feelings for people outside of my relationship.  Notable comments were things like, paraphrasing, “Why should how she feels/felt about you even matter anymore?  She’s married, isn’t she?”  Or, also paraphrased, “She’s just being a selfish bitch and creating drama because he’s happy and it’s not with her.”

I’m not going to launch into some tirade defining what an open relationship means, but just know that my relationship, and yes my SL marriage, is open.  Does it mean we engage with every person that bats their eyelashes at us?  No.  But it does mean exactly what it says… open.  So long as we still focus on each other.

That said, I also saw a Facebook thread a couple days ago equating the concept of polyamory with cheating.  Polyamory is about the furthest thing from cheating that you can get.

Polyamory simply breaks down into, by definition, the ability to love more than one person.  Poly… more than one… amory… dealing with love.  Yes?  With me so far?  Now, in an actual poly relationship, everyone is open about what’s going on, everyone is honest, and there is communication.  There ARE people who cheat and call it poly… but TRUE poly is based around open communication and honesty.

The example that I used in the Facebook thread… Say Boy A and Girl B are in a relationship.  In a true polyamorous relationship, if Boy A wanted to bring in Girl C… then he would first sit down and speak to Girl B about it.  Does she want a third in the relationship?  Is she ok with it being another female?  Does she want to have a sexual relationship with this third female as well, or will it only be sexual with Boy A?  Then – at least for someone like me to feel comfortable bringing in a third – Girl B and Girl C should sit down and get to know each other a bit, so that a complete stranger isn’t coming into the relationship.  If everyone is ok with everything that’s going on, THEN Boy A and Girl B would bring Girl C into their relationship… either as a triad (everyone interaction sexually with everyone else in the relationship), or a V (Girls B and C only having a sexual relationship with Boy A, and not each other).  Everything was honest, and everything was openly talked about BEFORE anything happened.

Cheating, would be if Boy A sneaks around and has a relationship – sexual or otherwise – with Girl C behind Girl B’s back.  That’s not open or honest.  That’s not poly.

But anyway… I guess I felt the need to clarify for a few nosy people who have my name in their mouth… about why I would ‘have feelings’ for anyone other than Master, when I’m married to Him in SL.

And for the record, Master is married in RL.  So don’t come at me about ‘neglecting’ my primary SL relationship.  I’m not His primary, and that’s ok.  It’s always been that way and we work with it.  🙂  So please quit analyzing my relationship like you know what’s going on.  Ty!  ♥

Pose || Sisters | Little Friend
– This pose is modified with AnyPose to look the way it does in this photo.