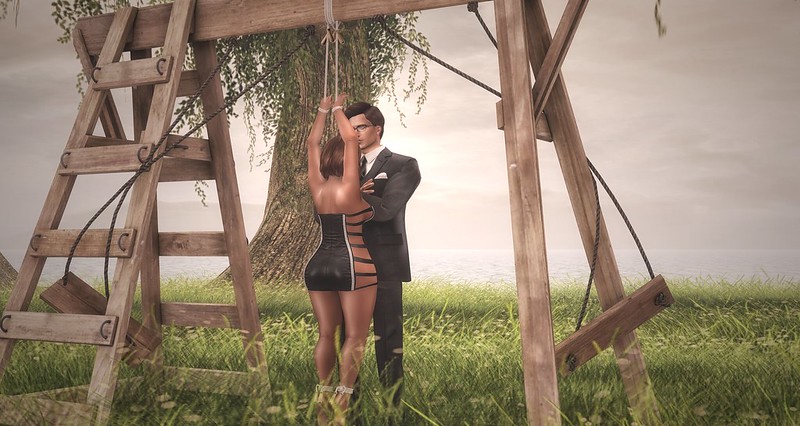 I will never look at a swing set the same again after this night.  *Purrs and grins*

But for real, though… I had something else I wanted to write about with this particular blog post, but after seeing SL Secrets today, I’ve got some stuff to say…

We know I don’t play ‘name and shame’ here, so before I get into anything, don’t ask me for names.  I won’t give them.  Privately or otherwise.  And if what I write here makes you butt-hurt, please find the closest ‘x’ in the corner.  No one forces you to be here, and so I’m not going to make you stay if the things I say in this post irritate you.  I’ll see you next time for a different subject matter.

The thing about manipulative abusive people… is that most of them seem like such nice people!  Like… I’ve been catching up on Grey’s Anatomy episodes, and in the episode where we meet Jo’s ex husband, like he seems like such a nice guy, doesn’t he?  So many people in the hospital are fans of his work… and people just generally like him.  Even Jo liked him when they first got together.

I realize the photo today is of myself and my Master/Husband… so needless to say I got out of my involvement with this person.  But bear with me.

I’m sure as the comment section of SL Secrets evolves today, if this person and their situation is relevant enough to make it to the comment section at all, then several people will come to their defense.  Because they’re just so damned charming!  So charming, in fact, that they can carry on multiple relationships privately, simultaneously without actually defining any of them as a real ‘relationship’ so that they can never be told they were cheating.  Meanwhile they string everyone along and it’s like some emotional contest that people are trying to win, without knowing they’re actually competing.  In the end, someone eventually ‘wins’, and they out their relationship publicly.

And from what I’ve heard from those in that position, the ‘winner’, it seems blissful when it finally happens.  Because oftentimes you’ve been on the down-low for SO long – because, remember, they were stringing others along too, all while telling you they have to be ‘sure’ of you – but finally you can be open, and show how happy you are, right?

But then magically they start to… change.  Suddenly some people you thought they were good friends with, they’re telling you how crazy they are.  How bad they are.  And what you don’t know at the time – or maybe you never knew, even when you got out – is that these friends are almost always other women, and they are the other women who were ‘competing’ for them when you ‘won’.  They try to make sure that you never believe anything they tell you about their dealings with them.  They’re crazy.

And you believe them.  Because they’re just so damned nice and like-able, right?  Why would they lie to you?

However, over time things start to change.  Things they used to love about you – or at least say that they loved about you, because let’s remember boys and girls, this person doesn’t love any one or any thing but themselves – are now suddenly a problem.  They are ‘wrong’, or they need to ‘change’.  And then eventually it’s not just things about you that are wrong… but YOU are wrong.  YOU need to change.  Just you… all of you… overhaul your entire being to keep being what they want.

Little do you know at the time, they’re setting you up… so that when they eventually dump you, they can try to ease themselves out of it with an excuse, either way… either with “You changed, you aren’t the woman I fell in love with,” when you do make changes for them… or “We just grew apart and don’t want the same things anymore,” if you don’t change for them.  Again, they’re ‘covered’ either way.

And then the competition begins all over again, with a whole new set of women.

But the people on the outside, who never make it to the point of even ‘competing’ for this attention… all they ever see is this charismatic, likeable, attractive person… how could they ever POSSIBLY be these horrible things?

No one believes it… until it’s too late… and they’re involved… and subject to the whole cycle all over again.  It’s why abusers still exist, and still get away with it.

Because they’re too good at what they do.

— I will come back and credit what Master was wearing when I get from him where his suit is from. ♥ —