I post a picture of myself, cause I’m lonely
Everyone knows what I look like, not even one of them knows me
Yeah, I just want to drink tequila with my friends
I’m so defeated, I just want this shit to end… 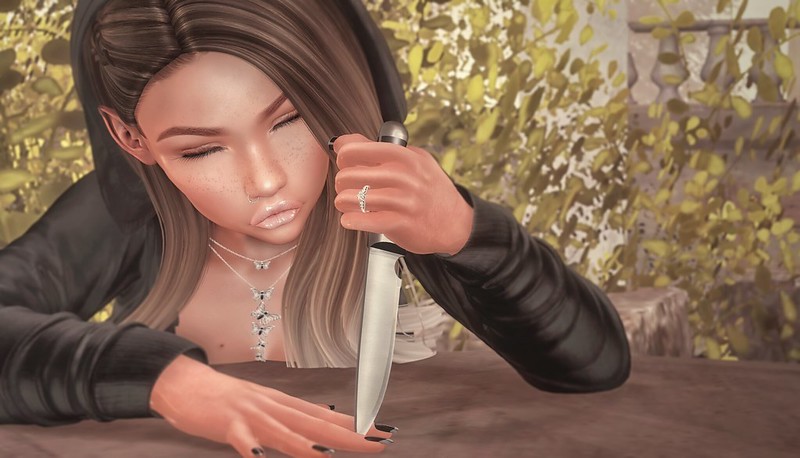 My muse is extra flighty lately.  Pardon me while I beat her back into submission…

Also, I’m incredibly unsure how I managed to get the environment to look peaceful and pretty while I have a knife in my hand.  I’ve just learned not to question what happens when I’m tinkering around in Photoshop.

I may or may not be slightly up to my eyeballs in stuff to do right now.  For those who don’t know, my wedding (SL) is in 5 days… and my stubborn-ass decorated the space myself, so I’m just constantly looking for those small little detail pieces that will make it ‘perfect’.  While still looking for some pretty important pieces… like oh, I dunno… a cake…

Don’t even get me started on my latest cake-related endeavor.

But asking a Designer about a cake they made is what brought about this current train of thought today.  Can I just generally ask the SL population who happens to sit through reading these things… what good does it do to lie about miniscule shit?  Like I’m not talking about some of the typical shit we see in SL like woman is really a dude behind the keyboard… guys is really married in RL… like that’s significant stuff… but where does it get you to lie about piddly little shit?

Like… I notecarded a Designer about a cake they had made, asking about a potential recolor and asking for how much that would cost… I mentioned that they had participated in POE 10, not as anything other than so they would remember how I knew them/knew of them.  Lol.  When they replied, their first comments were not about the cake, but about the Hunt, and about how they supposedly contacted me about participating in the upcoming May hunt.. which I have no record of – so if they did, they didn’t contact me via notecard on the Hunt avi like I ask people to do, and I had no chat history on my main with this person since October of last year… but then they said, “I also contacted you about signing up for _____, but also no luck or answer.”  Where the blank is filled in by the name of an event.

I’ve only just recently started working with this event, and the only Designers I’ve spoken to about it, are designers who are currently participating.  I have not had questions from other Designers about participating in future rounds… I’ve been doing this job for less than a week… like… no, you didn’t contact me about this event.

But that’s the weirdest, and smallest thing to lie about.  So why do it?  Like… where do you think it’s going to get you?  I don’t understand…

And it’s not even like they’ve gone to the event owner to say, “I tried contacting Deia about participating and she didn’t answer.”  Like… no… they are just talking to me about it.. in a notecard about my wedding cake.

Not to mention the OUTLANDISH price they wanted to charge for the cake.  (Granted, the original cake is pretty over-priced to begin with, so adding a minimal recolor fee on top of it just made it that much worse… but yeah… needless to say, I’ll be looking elsewhere.)

I just got so confused by why they would lie to me about something that small and inconsequential.  Isn’t that what a pathological liar does?  Like they get so used to lying that they lie about everything, regardless of how small or meaningless it is?  “What did you have for dinner?”  “Soup,” when they really had a salad?  I just… don’t understand…

And I didn’t really intend for this to be the content of this post, but I think it’s the Aspie in me is stuck on that one part of the notecard I didn’t understand, and I’m going to wind up obsessing over it until I find a new target for my energy, or until I finally do understand it.

Shape || Mine
Head || Lona Bento Mesh Head (v3.0) | Catwa
Skin || Lisa Skin (Sun Tan Tone) | Studio Exposure
* Lipstick || Luscious Lipstick (Pack 3) | IDTTY Faces | Ultra | new!
* Hair || Mishi Hair (Hoodie Fit; Natural Ombres) | Foxy | recent!
* Dress || Liza Corset Hoodie Dress (Hood Up) | Blueberry | recent!
– Blueberry is currently having a massive 50% off sale in honor of the brand turning 6!  Everything except the most recent releases are 50% off, and each day they are giving away 10 gift cards, chosen in random methods, so be sure to pay attention to the in-world group, be in the sim shopping, and follow the Blueberry and staff’s social media pages for your chance at some store credit!
* Necklace || Mariposa Necklace | Cae | Bloom | new!

Blogging Tune || “Everybody Hates Me” – Chainsmokers