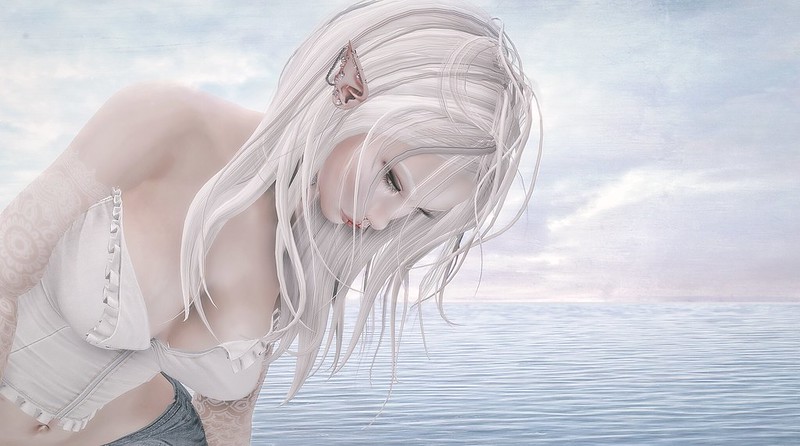 I did a bit more editing to this photo than I usually do, when it came to drawing in details that I couldn’t capture sufficiently in SL.  I felt a bit like I was back in my days of having a shitty graphics card, where I would have to draw all my shadows and any details that I wanted.  However, in this case, I was prioritizing what the light on the avatar looked like, versus the sky and water detailing, so I added all that in afterwards.

And this hair, though!

This song has been stuck in my head since my local radio station played it one night for a “Test Drive at Five”, where they play new music and ask for the listeners’ opinions by tweeting thumbs up or thumbs down with their first impression of the song.  This is the first time I’ve heard a song that had, literally, 100% positive feedback.  That’s not to say that there aren’t people who dislike it… but they apparently didn’t dislike it enough to tweet about it, or call in to the station to give their opinion.

It’s just a lot of how I’ve been feeling lately.  “Afraid to be alone again, I hate this.”  I’m still kinda coping with the idea that T may very well have cancer.  And I term it that way… “may very well”… just because he IS seeking a second opinion, and there’s a small bit of strange inconsistency with the findings… they found JAK2 in his blood, but not his bone marrow, which is strange.  So I’m holding on to that last bit of denial… that just MAYBE he’s been misdiagnosed and that second opinion will catch it.

And although that particular line describes how I’m feeling, I also understand that, like… he’s not really ‘mine’.  Like, losing him to PV wouldn’t be me being a ‘widow’ or my ‘boyfriend dying’.  We’re not… together.  But sometimes there’s still that connection that it FEELS that way.  When his mom was sick, I felt like a member of my family was sick.  We always seem to have been that close, even when we were just forming a friendship that first summer.

So when I fly off the handle more often than usual lately… I’m probably just more easily overwhelmed, and closer to my Aspie meltdowns than I would be normally.  This is weighing on my head, as well as just the general stress of getting used to a new RL job.  One that I want to do well at.  I made a great first impression with how fast I’m learning… but that just means that there’s that much farther to fall if I screw something up.  That, and there’s the potential to become a supervisor/manager of some kind when I do come on permanently (I’m here with a temp contract right now, but my Director has already said she wants to bring me in permanently at the contract’s end).  The promotion would help with the pay cut I took to come here, rather than staying in my field and praying to find something there.

I think that’s where my photo randomness has come from lately too.  Sometimes I’m just stressed and taking out my aggression in photo/editing/outfit form… other times, like last night when I took and edited this photo (yeah, I was up until 5am in Photoshop, cause I was just inspired) I’m just overwhelmingly sad and Photoshop is my therapy.  So as long as you can bear with me, I think I can come up with some pretty things… and some different things… and just… more things.

Also, if you missed the post I put up last night, I’m running a raffle for the next week for some Zibska gift cards!  You can find the raffle and all the ways to enter, HERE.

Pose || Sayo 6 | Argrace | recent!
– These poses are include with the Sayo hair, which I think is amazing.  Each pose is designed for the way the hair is ‘flowing’ in the design, so it adds to the realism of the shot.  It definitely made me happy. –