Immediately we find out then
That I can be blamed for this
Well, then You just figured out today…
And You’re so sweet You say
Go now and get Your own life and live it Your way… 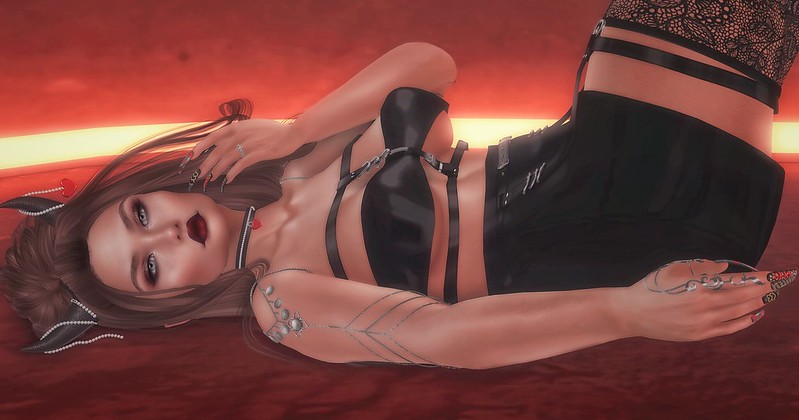 This picture is having a ‘thick thighs save lives’ moment.  And I’m here for it.

Today’s outfit is kinda special… for a completely unspecial reason. Lol.  Let me tell you a story…

So.  I haven’t supported or shopped at The Chapter Four for a good bit… with the exception of recently, I popped in long enough to get my current eyes, from L’Etre… and that’s just because I was an impatient bitch looking for good eyes and wanting them *now*, not when they went back to the store.  Anyway… so it’s been no secret that I don’t support TCF, or Pupito, or anything Pupito does.

But I don’t know that I’ve told any of you why, really…

It’s about the same issue most people have had, really… or at least that’s how it started.  Back for their birthday round in 2017, TCF asked Designers to make a free gift.  Shoppers could click the box and get the gift, as long as they were wearing the Update Group tag.  A lot of Designers were happy to do this, as many do like doing free gifts when they have the time.  The Update Group was always free to join… but a few days into the event (which, the first few days after an event opens are the most popular, as we all know) it was brought to a few of the Designers’ attention that the Update Group magically had a group join fee now.

So Pupito basically took it upon himself to take advantage of the Designers’ generosity and use it as an opportunity to make a bunch of extra money for himself.  People did the math at one point, and it was ridiculous how much was made just in those few days, with that group join fee.  I don’t remember specifics, so I won’t speculate, but I remember being shocked at how much it was… and livid.

A little bit into the future, my sometimes-forgetful ass applies to blog for The Chapter Four, and I’m granted a blogger position.  It took me less than a month, however, to 1.) Remember this is the event that screwed over those Designers and Shoppers, and 2.) See other things that I didn’t particularly enjoy about how the event was run.

What I mean is… the disorganization was insane.  There were a couple managers at the time, and a blogger manager who never actually communicated with anyone (par for the course with other things I’d blogged for that she managed), and then both owners.  I would literally watch one owner send a notice about something… and then a Manager come in 15 minutes later and send a notice about the same topic, but with different instructions.  And then Pupito would come in and send a notice correcting what the manager said, saying it was wrong, and giving the correct information… and then a couple hours later the second manager would send something completely different.  Like… I was fortunate enough that, as a blogger, I could ignore most of those notices because they were mostly about setup for the upcoming round and sign-ups for the round after that… but like… I couldn’t imagine being a designer trying to decipher half of that.

And then… oh then… apparently I came into the group around the time of sign-ups for the next round.  And the fees had changed recently, increased, of course.  So I log in and there’s a notice about the rooms and sign-ups… and immediately I know it’s going to be a shit-show, because the first paragraph is Pupito complaining that everyone keeps trying to sign up for the “Under 100” room, which is the cheapest room at that time, with a fee of L$1500.  He tries to justify that the reason they make it that cheap is because you have to sell your items for under L$100, and so the other rooms should be much better and much more popular, because you can price items what you want, etc etc.

*Eyeroll*  Fine, whatever.  Complain, vent, get your frustration out.  However, what really got to me… was this sentence right here, from the notecard he sent in the group notices about this registration ‘problem’:  “If this thing about 1500 L room (Under 100) continues getting full desperate in 1 day. I am going to change the price again and will be same as other rooms.”

So… despite what was said in ANOTHER notecard a month previously (and recent days before this notice) about the only reason that the fees had been raised was because the cost of running a high-quality event in SL had increased, and they had brought in additional staff to ensure better service etc etc… that was the only reason the fees were raised… basically this one sentence from Pupito pretty much confirmed that he was just jacking up prices on a whim, and there was zero reason or need for it.

After getting that notice, I just left the group.  I couldn’t support an event with a greedy owner like that.  (And a note here, when I went to the form linked in that notecard to see if it were the form from that month last year, to where I could see what the cost of the other rooms were in comparison to the Under 100 room, it turns out that is the same form used every month and is just updated with the current month in the title.  And the Under 100 room is now L$3,000, so it looks like he made due on that threat.)

Fast forward to more recently… Pupito decided to take on Seraphim.  Now, I’ve had mixed opinions about Seraphim based on mixed experiences with them.  I’m an intensely critical person, and I admittedly hold grudges when I’m wronged by someone.  So, I wanted to go into this situation and see something that Seraphim did wrong… but I couldn’t see a damn thing.  Pupito was just… once again… acting like a dick and verbally abusing people for not giving him exactly what he wanted exactly when he wanted it.  He was pissed that Seraphim wouldn’t provide free coverage to his new-but-not-new-because-it-was-an-event-that-flopped-last-year-and-is-coming-back event Lost & Found… and then he got even more pissed when he tried to level a threat against Seraphim’s owner, saying he didn’t want coverage for The Chapter Four either, figuring that would get him what he wanted… and when it didn’t, he just resorted to the same old same old internet bullying that he always does.

And I just don’t think people should take his bullshit sitting down anymore.

So we’re over 1,100 words into this blog post and I STILL haven’t gotten to the reason why this outfit is special to me.  Haha.

A couple days ago, I’m scrolling through Facebook, and I see that someone I’m friends with has commented on a thread that was started by what looks like more Pupito screenshots.  I click through and, sure enough, it’s Pupito acting like a child again.  However, the Designer’s response… was too hilarious for me to not acknowledge.  I ugly-laughed, on a day that I very much needed laughter.  Like… sure… it’s not always in a Designer’s best interest to be messy, however, this was just the right amount of “standing up for themselves” and hilarity that the ‘messy’ was totally worth it.

As a result, I went and found this Designer’s outfit that they sent through the Whore Couture Fair group, and made it my mission to style something dope with it, so that I could blog it.  Thank you, Avanti, for further exposing this douchebag to the world, and also for your hilarious clap back.  You made my day.  And so I hope this post might at least make you smile.  ♥