I got issues and chips on both of my shoulders
Reputation precedes me; in rumors I’m knee-deep
The truth it’s easier to ignore it, believe me… 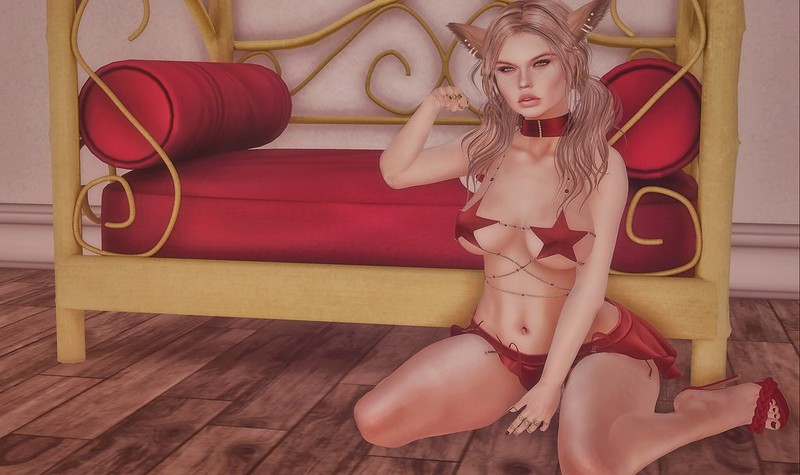 I feel like I’m… less covered than I have been lately, but then when I went back on my Flickr to look at my last several blog posts, I realized that y’all don’t see me look like a bum like I do half the time that I’m not blogging… like… jeans and a hoodie are my staple… rarely am I wearing shoes… you all only ever get to see the pretties when I make an actual EFFORT to get dressed.  Haha.

But most of what is in this post is compliments of the fact that Whore Couture Fair is coming!  Originally, it was going to open in the next couple of days, however, we must discuss a few things here…

The grid has been unstable the last two days (I’m writing this Tuesday night).  People have had mixed reactions to this instability… and around those reactions, some drama has occurred.  There are some incredibly judgmental people out there trying to shame people for being upset that the grid was unstable.  Things like “It’s just one night”, and other such accusations of having no life outside of SL, or being “that addicted” to SL that they can’t take one night without it.  There’s “always other things to do” or “logout and go to RL for once”.

I think there are a lot of things about SL that these types of people don’t understand.

There are plenty of other things that SL can be for people, and plenty of other reasons why people may have been upset with the grid’s instability and near constant crashing the last couple of days, however those are the big three for me.

First: SL is a source of income for a lot of people.

Many many creators, land sellers, performers of all types, etc. make a real life living off of their work in Second Life.  For some, SL is their only source of income, and they can pay their RL bills from it.  Because of this, and with the heavily event-driven culture now, deadlines are a nearly-constant worry, and to lose even “just one day” of work, as some people were downplaying, can become detrimental to a strictly-planned work schedule.  If creators lose “just one day” of work, it can throw off their whole workflow for an upcoming deadline… if a performer loses “just one day” of work, it could be their only show that week, and suddenly their income for the week is zero.  Even organizers losing “just one day” of work not only affects them, but they are also indirectly affected by how that one day affects the designers in their event.  It’s just a lot for people to deal with.  Just because SL is a fun, social platform for you, doesn’t mean that it’s all sunshine, rainbows, and unicorns for everyone else.  Some people keep an intensely stressful work environment in SL and these past couple of days have thrown that off.

Additionally, maybe some people don’t make their RL income in SL, however, they make their ‘disposable’ income in SL.  Myself, for example.  I don’t cash out my lindens into RL money, but I also don’t upload RL money to use in SL.  Anything that I spend in SL, is lindens I’ve made here.

Secondly: SL is the ONLY source of social interaction that some people have/can deal with.

A comment that I made in one of the threads on this was that for some, SL is the only source of social interaction that some people can tolerate.  The example I used was myself… I don’t go to parties much in RL.  This isn’t exactly a party town outside of Spring Break season, but even if there were more parties, I still wouldn’t really go.  I don’t do large groups in small rooms.  It is intensely triggering to me.  However, in SL, it doesn’t seem to bother me as much.  About the only thing that triggers a sense of overwhelming social anxiety for me is if I’m in a room of people where several of them are in voice at the same time, loud, and talking over each other.  Regularly, I’ve had to turn voice all the way down for a few minutes and re-collect myself.  But otherwise?  I don’t have the same social anxieties in SL as I do in RL… so I can go a party with 60 other people and just dance with my friends and have a good time.

With the instability of the grid the last couple of days, the unfortunate part of this point is that it’s not just about you.  If you can’t get into the grid, sure, you won’t be able to attend the party, but there were instance Monday where some of us could get back into the grid, but maybe a party hostess couldn’t get online… or a DJ… so several events across the grid were cancelled.  Even into Tuesday, some things were cancelled.  So then you’re left being on the grid, having plans to go somewhere, and then having nowhere to go.  Which can just further re-enforce that feeling of social isolation you might feel in RL.  I can fully understand being upset about that.

Third: SL is a place for neurodivergent people to have some sense of normalcy.

I use ‘neurodivergent’ as the term here, because it covers a broad set of people.  I tend to default to issues affecting high-functioning autistic people, just because that is what I relate to, however, I recognize that there are other types of being neurologically ‘not typical’.  So that’s what I mean… neurodivergent… as in not neurotypical.

But for me… as someone who is neurodivergent… SL is a place that is more normal for me… I can participate in ‘normal’ things, all from the comfort and safety of my home.  Some people could call that “not having a RL”, but at the same time… the people in SL are very real people.  We aren’t playing the Sims, interacting with a bunch of AI.  We’re hanging out with, talking to, and otherwise interacting with REAL people behind the other avatars.  SL is not a game, but rather is essentially a 3D chat program.  It’s a chance for some of us to be more ‘normal’ that we can be in RL situations.

But… all of that said… because of the grid issues the past couple of days, the wonderful people at Flair For Events have made the decision to push back the opening of Whore Couture Fair by a few days, to give Designers adequate time to set up without further pressure for something beyond their control.

You’ll have to wait a few more days to get these awesome items, and even more, but I can promise it will be worth the wait!

** I will edit this post the morning of March 2nd to include the SLURL for Whore Couture Fair.  (I will be out of town without access to SL the morning of the 3rd when it opens.) **