We were crazy, tragic and epic, and so amazing
I’ll always wear the crown that You gave me
We will always stay lost in forever
And they’ll remember
We were legends… 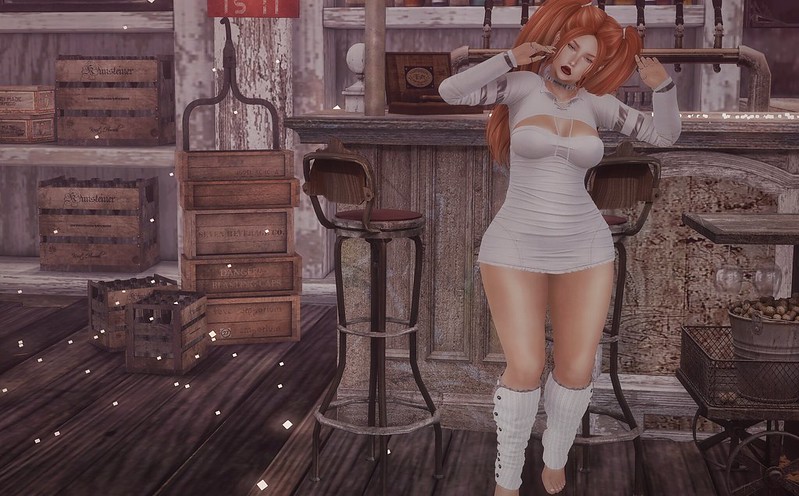 Ohai.  I figured it was time to blog this dress/sweater situation, because I’ve always gravitated back into it since it came out.  I’m a sucker for a good cropped sweater, though… and the fit of any Blueberry dress is to DIE for… so here you go.  If you somehow live under a rock and didn’t know this release was a thing… scroll down.

Since the last time I wrote here, I had my RL birthday.  Yay me, one year older, blah blah.

But what I wanna talk about was what happened about a week before that… maybe?  I had a very strange encounter with mortality… though no one almost died, not really anyway.  It’s strange, but it resulted in me pulling the car over and crying in the silence of dead air on the radio.

First of all, I was sick as all hell.  But I didn’t know what was going on.  That was the week of the mysterious pain in my side keeping me off SL cause I couldn’t sit upright for awhile.  It would get worse when I ate, I was nearly constantly nauseous… but I couldn’t figure it out.  Anything I Googled (I know…) kept telling me it was Gallstones and I should go to the ER *immediately*… except I don’t have my gallbladder.  And I know stones can still form in your bile ducts and stuff… but like… I’ve had Gallstones, I know what THAT pain is.  And it was on the wrong side.  So… strike out there.

I’d called my mother because I was at the point of the pain bringing me to tears, and she’s the resident nurse that tells me if it’s just my anxiety intensifying my symptoms or if it’s legitimately a hospital-worthy concern.  And generally I take her advice, but that night was the end of a week of asking her advice and her saying unless there was a fever or I was literally doubled over in pain, it was just something I had to wait out.  I was in tears on the phone, dry heaving (beautiful picture, isn’t it?) like, “I don’t know what to do…”  She ended the conversation with a promise to come over the next day when she got off work and actually poke around at that side herself… cause I’m not sure what those internal organs are SUPPOSED to feel like, versus what’s ‘swollen’ or other irregularities.  She specifically made the comment, “With the flu being as bad as it is down here, I know I don’t want to sit in an ER waiting room right now.”

I’d texted her about 10 minutes after we got off the phone, asking if an ulcer would mimic gallstone symptoms and she was oddly quiet.  After that hour, she texted back and said, “Yes, it could be.  Sorry, was driving.  Have Alan in the ER, potential blood clot, happened fast.”

So, first of all… that’s a giant ‘fuck you’ from the Universe… not an hour beforehand she’d said she didn’t want to be in an ER waiting room… and where was she?  But putting that aside, I texted back asking for updates whenever she had them, and then left to go pickup dinner.

While I was driving, the radio was behaving strangely.  It was silent when I got in the car, so I naturally assumed I’d turned the volume down (I live around a lot of older people, so even though my volume only ever really hits ‘8’, I tend to turn it down when I’m pulling through the edition to get to my house).  I hit the up arrow a couple times and saw it was already on 8.  Ok, so my next thought was something up with the radio itself… it’s digital… so I did what I always do… turned it off and back on again.  Lol.  No improvement.  Then I thought maybe it was the speakers, so I flipped to another station… nope… playing perfectly.

All of that took place within the span of a minute, and still there was dead air.  I figured, “Maybe it’s a shift change or a small tech glitch.  They’ll get it back on,” and pulled out of my edition to head and get my food.

By the time I had driven to where my food was, gotten it, and was about halfway back, it STILL hadn’t come on.  So I pulled out my phone (at a red light!) and looked up the number, quickly dialing.  The lady answered, one of the producers who screens calls, likely, and I said, “Hey, I’m not sure if it’s doing this other places, but here in _____ (my city), you’ve had about 10 minutes of dead air.”

She says, “Oh my.  Well it certainly isn’t happening everywhere else, no… where’d you say you were again?”

“Do you know when it started?”

“Oh wow.  That’s… oddly specific and really helpful!  You’re not running a station out there, are you?”

I had to stop for a moment and top the catch in my chest.  “No… just… happened to be paying attention to the clock in my car.” And I hung up without another word.

For you to understand fully why this may have upset me… you have to know that my father was a radio DJ before he and my mom got married, including in the Army.  It was always his dream to move to Texas and get a radio DJ gig full-time… but mom wanted to stay in Indiana near her parents and her family, etc.  Most of dad’s family was there too, so it wasn’t a purely selfish thing… but anyway… he was a radio DJ.

So in that moment, I had to pull the car over and just stop… and breathe.  I apparently had a moment when a bit of my father came out in me – for once, in a good way – while simultaneously, my step-father was in the ER with a potential blood clot in one of his legs, the day after he’d had a Heart Cath.  It just… wasn’t a good time to be reminded of my dead dad, if that makes sense.

I pulled myself together within a couple minutes and finished the drive home – still in radio dead air, btw – and ate my dinner and continued my night like normal.  Step-father turned out to be fine… no blood clot, and the next morning both my side pain and his leg swelling were mysteriously gone.

And all I can really do is quote my mother: “Weird.  Both of you.”

Pose || Inspired – Rolex 01 | Sync’d Motion
– Both photos were taken as freeze-frames of this particular dance animation.