God, sorry if I sound too do-goody
But for the sake of our community
I’ma take the opportunity to let you know
There’s another stage after puberty… 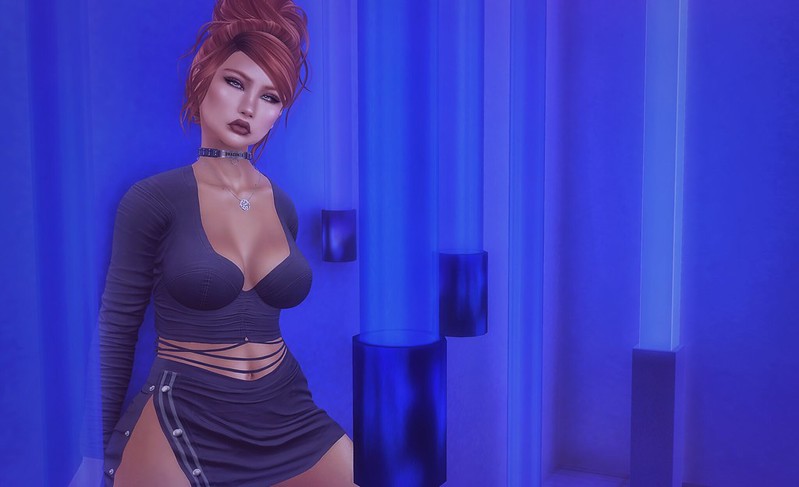 Ok.  So.  I’m going to start this post by saying… sorry, not sorry.  Everything I say in here is, and always has been, solely my opinion.  That’s what my blog is for.  To share my passion for photos and fashion in SL, along with my own personal thoughts about whatever is going on in my life at the moment.

And what’s going on in my life right now is all this Backdrop City drama.

These photos today were taken at Backdrop City.  But the thing of it is, you would never know that if I didn’t mention it here, and if I weren’t going to credit the location in the bottom of the post, with the rest of the credits, like I always do for any photos taken anywhere other than my home.  All you can feasibly see in this photo are myself, my clothes, and the backdrop I’m using.

But how are you supposed to know just by looking at this post, if I went somewhere else to use their backdrop, or if I bought the thing myself.  Sure, the specific designer might know, if they really cared enough about a single set of pictures from a single blogger to stumble across my photo and be like, “Huh, I’ve never heard of her…” and search their customer history to find out I haven’t bought anything from them.  But do Designers really have the time to do all of that?

And most of you logical people are probably sitting here at this point going, “Deia, why do you care?  Why not just avoid the conflict?”  I could.  However, I feel the need to stand up and join the voices of the Bloggers and Customers who are now being abused for our choices.  And yes, ‘abused’ is a harsh word, however, let’s look at a definition for the word ‘abuse’, provided by Dictionary.Com as the third accepted definition:

“to speak insultingly, harshly, or unjustly to or about; revile; malign.”

That is all that I’m seeing across my Facebook feed lately.  The drama began when a designer – we all know who by this point, but I still haven’t been about the name-and-shame game, here, so… – posted on their Facebook about how they’d found this free resource, a sim called Backdrop City, where someone was rezzing out backdrops they’d purchased for bloggers and other people to use.  This Designer was so upset, because it was “obviously” taking away sales from them… because after all, if someone liked the backdrop enough to use it at a free sim, they “obviously” would have purchased it themselves, if they didn’t find it at the free sim.

I say “obviously” in quotes because these are points that I personally do not agree with.

The last two points I would like to make here have been done to death… but I still feel the need to mention them, in case any of you reading this haven’t been present for the drama on Facebook and in-world.

First, photo studios with backdrops have been around foreeeeeeever.  Some of my first profile photos when I originally rezzed in 2008 were taken in these freebie studios.  And, to my knowledge, the creators of the photography studios that were rezzed in-world for others didn’t go after the studio owners, demanding them to take them down because those people – usually noobs – using the photo studio would have bought it themselves if it weren’t available for free.  In fact, that particular idea, in this scenario, makes me laugh… because I remember as a noob myself using them, I was searching for them in-world because I couldn’t afford to buy one of the fancy ones myself, but I still wanted good photos.  Windlight wasn’t a thing at the time, beyond the day cycle, and I didn’t have a decent graphics card like I do now… so I needed all the external help with my photos that I could get.  But yeah… these photo studio creators didn’t get all up in arms about it then…. so why are “Backdrop designers” getting all up in arms about it now.

Oh, right… the culture of greed that has grown in Second Life.  My bad, I forgot.

Lastly, this is literally JUST the same as the furniture and other objects that we all use to decorate our houses, public sims… some of these designers even use others’ objects to decorate their stores.  Someone had better get a memo to them that everything they use to decorate their store must now be made originally and exclusively by themselves… because what happens if I see a really cute bench by a Decor designer at a Clothing Designer’s store, sit on it, and take a picture.  Uh oh!  That means that clothing designer has just cost the Decor designer a sale, because I didn’t have to go buy the bench myself!

*Insert eyeroll*  Can you see how ridiculous this is?

The part that has really gotten to me, though… have been the attempt to control what bloggers do, no matter what products they are posting.  Now, I was not a part of this Blogger team anymore – and after seeing how the Designers react, I thank god that I wasn’t – so I can’t say 100% for sure the intent behind the words that were said… but in a leaked internal notice sent to a particular Backdrop/Deocr/Building designer’s blogger team, they stated, and I quote (with the store’s nane redacted):

“I hope as well that if you have questions as to why we are adamant and do not want _________ bloggers to promote or be a part of this new trend please private message me.”

I have… several problems with this singular statement, which is not even the entirety of the message that was sent.

This kind of behavior has to stop.  Without customers, there is no one to design for.  If you are going to turn away every single customer because you’ve alienated them, treated them poorly, or made yourself such a negative entity in SL that they are afraid to purchase from you… then your “work” to “protect” the sales you think you’re losing from resource sims like this is useless.  Because you won’t just “lose” those POTENTIAL sales… you’ll ACTUALLY lose EVERY sale, eventually.

Also… apparently nobody taught you to that if you shine a huge spotlight on something that you don’t like, 9 times out of 10 it’s going to just make it that much more relevant and popular.  I hope you enjoy how popular you’ve made Backdrop City since your tirades.  ♥

Backdrop || (will insert the name when I can get back into the sim without so much lag and find it again.  I tp’d out without the name, I’m sorry!)