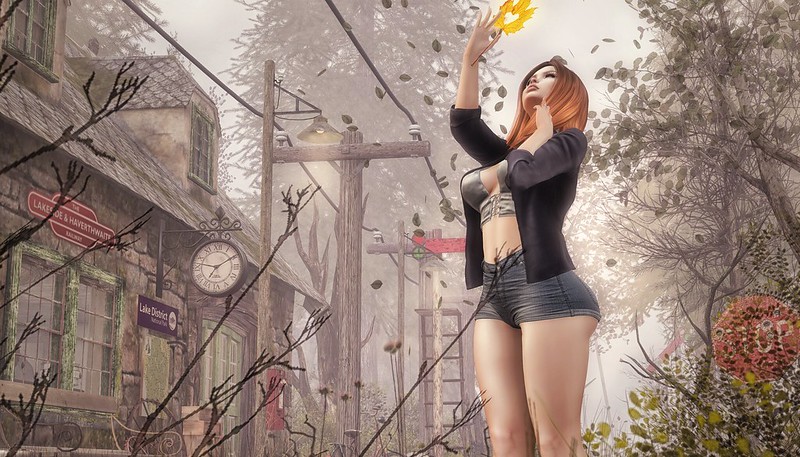 Don’t judge me… just cause this Sia song was in a My Little Pony movie doesn’t make it any less a Sia song.  Lol.   I never saw the movie… I just wound up listening to some of Sia’s Christmas songs, went to her channel to see if there’s anything new that isn’t Christmas-y… and found this song.

It just happened to be in a My Little Pony movie.  Lol.

And I’m also behind on Strawberry Singh’s #SecondLifeChallenges, so I figured this would be as good a time as any to try to do another one.

The last one I did was the Zodiac challenge, and I had a lot of fun.  Unfortunately, the one after it was Halloween in SL, and I’m about a month late on that… haha… so I skipped ahead to the next one.

Seems a bit appropriate… my blog will turn 5 in February, and the colder months all kinda blend together after awhile.  Haha.  Then again, ‘colder’ is relative… cause it doesn’t get near as cold in Alabama as it usually does in northern states.  But anyway, the winter months all just kinda blend together, so it doesn’t really matter that it’s not quite close to February at all… it’s winter.  So it works.  😛

Anyway… so here it goes…

1.) How long have you been blogging or vlogging about Second Life?

My blog started February 19th, 2013.  So this coming February, it will be 5 years old.  I’ve never actually gotten into vlogging, which surprises some people just because I can talk… and I can ramble… lol…  but between the slow internet and being unsure of really where to start or how to not be ‘just another’ SL vlogger… cause let’s face it most of them do the same things… there are very few true niche vloggers out there… I just haven’t thrown my hat in the ring yet.  I leave it to the good ones, like Strawberry.

2.) Why did you start blogging or vlogging?

Well, ironically enough… my blogging came out of my modeling.  I only view that as irony because as time went on, modeling began to be in opposition to my blogging… because the whole point of modeling is to squash the creativity out of your avatar and force you into a singular, recognizable image, whereas blogging places the emphasis on how many different ideas people can come up with, with the same things.  I was in my first pageant in 2013 and I had no idea what to offer potential sponsors of things for that pageant.  I was a brand new model, so my ‘name’ didn’t mean anything like it would have for others… so I had to actually offer some kind of incentive for designers to provide anything.  I offered to blog their designs, anything that was offered up for the pageant.  Thus the blog was born.

Before I started pledging, I was posting every day-ish, every other day… several times a week.  That is my ideal.  I don’t think I have enough ideas and enough patience to consistently do daily blogging for an extensive period of time… but every other day, or several times a week is the ideal.  Unfortunately, I’m just coming back after pledging, so it’s been a little less than that for the past three weeks, but I’m hoping to get back to that soon.

4.) Do you keep track of how many hits or subscribers you have?

I keep track more on my Flickr than I do my blog, itself…. which I know feels so counter-productive, since the blog is the meat and potatoes of it, for me.  However, we live in an instant-gratification kind of society where people just want to scroll through one place where they can see all the things they want to see, instead of hopping from blog to blog… so I do focus on keeping up on Flickr as a social media – trying to feed traffic from there to my blog.  Sometimes it works, sometimes it doesn’t.  *Chuckles*

5.) Which electronic devices do you use to blog/vlog with?

I just use my desktop computer when I’m blogging.  Though because Firestorm seems to have problems with my computer taking larger images and not crashing… I use the Black Dragon viewer to take my photos in.  With Black Dragon, I can get better graphic quality and larger images and still not crash.  Not sure what kind of coding issue exists within Firestorm that makes it unable to handle… it’s just such a heavy viewer for no reason.  Lol.  But that’s the only real thing I change between running around normally in SL and actually taking blog photos, is the viewer that I use.

6.) Do you monetize your blog or vlogs?  If so, do you mind sharing how much you make, approximately?

I do not monetize my blog, and I don’t have vlogs to monetize… but with Youtube’s algorithm being how it is, I’m sure my “no filter” style of talking wouldn’t be monetized anyway… because it wouldn’t be “advertiser friendly”.  LOL.

7.) What has Second Life blogging or vlogging taught you?

Honestly?  I communicate better here half the time than I do in conversations.  Lol.  The whole idea behind the name of this blog – Alexithymia – is that you have difficulty expressing the emotions that you’re feeling… so I learned better how to communicate here through a combination of words, photos, and music… instead of just trying to communicate with words.

8.) Do you feel like Second Life blogging or vlogging takes away from your real life?

I guess, in theory, it takes away time?  But so does everything else.  Otherwise, I have to steal a page from Strawberry’s book and say that it’s actually enhanced my real life.  It’s given me a creative outlet that actually has other people see it.  What I mean is… I write in RL, but I don’t put any of that out in front of anyone.  There is an entire plastic tote… like… an actual tote… of notebooks of my writing… whether it’s partner stories in middle school and high school… my own stories… my own poetry… etc.  I just kept filling up notebooks, putting them away, and starting another one.  But no one ever really sees it.  Whereas with stuff like this, you see my photos, you see what I write here… it’s a way to get creative passions in front of a wider audience, and it’s kind of nice.

9.) Do you have a mission statement for your blog or vlog, if so, what is it?

There’s never been an official ‘mission statement’ of my blog… but a few things have always governed how this blog operates: a.) I will never show something I wouldn’t wear myself, in some context – in that if I would never wear something ever… I won’t show it.  I don’t feel good about promoting something to my readers/audience as something you should buy if I would never buy it, b.) I don’t adhere to standards that are imposed on me AFTER the fact.  Standards for bloggers need to be at a healthy level… enough that a designer isn’t just tossing around product for no reason, but enough that the blogger can still have FUN with their ART… and I’m not a fan of something imposed on me after the fact.  I read applications thoroughly, and it got to the point that I had to put it in my review policy… because applications would come out with no standards whatsoever, and then if you’re accepted it’s like, “Oh, btw, you must post 6 posts per month,” or “Oh, btw, you must post EVERYTHING I give you,” and it was just becoming unfair to bloggers.  I refuse for my art and my fun to suffer for people who don’t know how to communicate.

Be yourself, always.  There are standards you may/will be held to if you begin blogging for other stores, but always be yourself… you should never sacrifice that for the sake of other people.  Losing yourself in other people will ultimately lead to you going against the second tip…