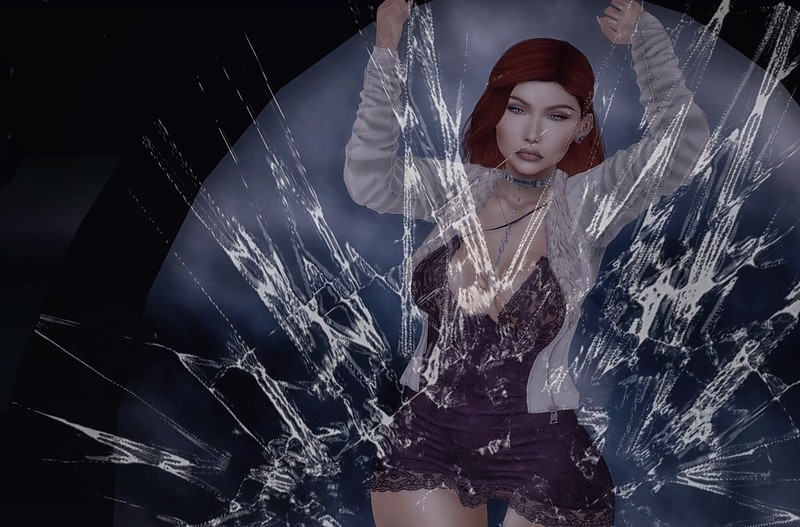 “But Hide N Seek is only fun when somebody’s lookin, and nobody’s got the time.”

So.  It’s been a hot minute since I’ve written anything in here.  Most of you know, as I talked about it regularly across my social medias, here in this blog, wrote and sent notecards… and if you talked to me in-world then you probably heard about it cause I was busy – lol – I was pledging.  That was a long… semi-grueling process… and it took away a lot of my time and ability to blog, with mandatory uniforms, etc.

But I’m back… and I may be reppin’ some Sigma purple in this dress.  *Shifty eyes*

A little less than a week ago, Gabbie Hanna killed it again, releasing her second single… like… ever… and for someone like me who’s very lyric-based, I’m in love.  Maybe it’s her voice and how you can tell that she’s delivering lyrics she really believes in, or maybe it’s just because this song so eloquently speaks my heart from the last little while.

I think I’ve talked about this before… but it became more and more prevalent over the last couple of weeks, so I feel the need to mention it again… the way my brain processes communication, and people in general, I can’t tell the difference between fake-nice and, like, *actual* nice.  I just… can’t.  9 times out of 10, I wind up hurt because I go all-in in a friendship when someone’s being nice to me and I think it’s great… then come to find out it was this fake niceness the whole time… either to get something they wanted out of me, to take advantage of some kind of a skill, or for some other reason that usually only benefits them and either doesn’t benefit me or, worse, harms me in some way.

And you’d think that I’d learn to pick up on patterns… things people say and do when it’s fake, versus when it’s genuine.  And I’ve tried.  Hell, I’ve tried WRITING THIS SHIT DOWN… lol.  But the thing about humans is that 1.) They’re incredibly intelligent most of the time… so they know how to change up their game in order to avoid being found out, and 2.) They’re incredibly emotional creatures…. they know exactly how to play on your emotions just enough to make you question your logic.

Most people assume I’m right-brained, because I’m an incredibly creative, passionate person, and I find my happy place in things like music, photography, writing, etc… but to be honest, I’m probably equally right- and left-brained.  Which part of my brain governs my decisions at any given moment is usually determined by the moment, my mood, the situation, etc… but once it swings one way, that’s it… the other side is chucked out the window.  Which isn’t… normal… or healthy, most times, but it’s just how it works for me.

Either way, I just find myself incredibly mentally exhausted, the more I deal with people like this.  To the point that I tend to completely cut them out of my life, and I don’t look back for a good long while.  Some question how and why I can do that… just up and, “Nope, fuck you, I’m done,” and not second-guess it.  The twisted part?  I DO second-guess it, all the time.  I open up their box, or my phone, or a Facebook message… ALL the damn TIME… and I hover there for a minute… and then I remember, “No… this is what they did… this is how they are… this is what you fell for before…”

And I know that with my love of Psychology, I should approach life from the fundamental belief that people can change… but at the same time…

A tiger doesn’t change its stripes, and neither does a weasel.