We fight like lions, we howl at the moon
We should be flying, instead we bury the truth
But I know inside, we’re beautiful creatures… 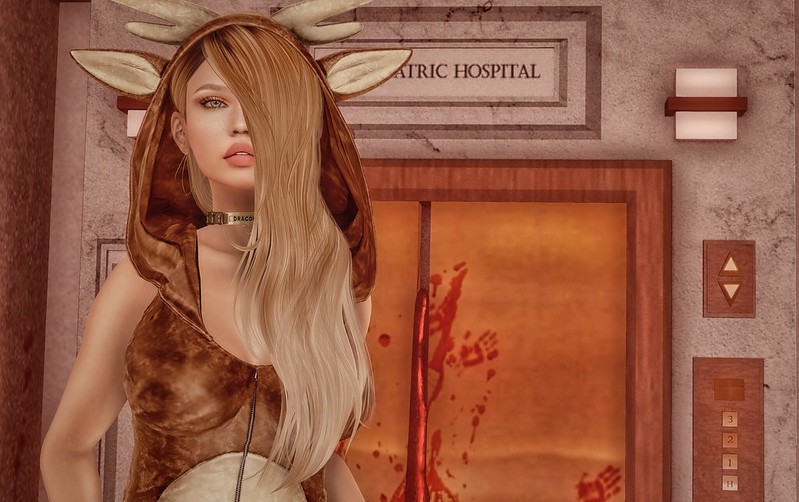 Before anyone starts reading and goes to make this comment… yes, I’m aware this is a deer onesie, not a goat.  *laughs*  However, the deer was the closest to a goat in this gacha set, so you gotta bear with me.  I did what I could with what was at my disposal.

Besides, it was only to be smartass-y about this particular topic anyway.  Lol.  Zodiac Signs!

Yep, I went poking around Strawberry Singh’s blog again today, and in trying to keep with the tradition of her weekly challenge, she issued another #SecondLifeChallenge on Monday, about your Zodiac Signs.  Now, based on my avatar’s birthday, Deia would be a Sagittarius… however because it’s myself driving the avatar, we’re going to go based on my RL birthday, which is January 19th, the last day of Capricorn.

People that are born in the first or last few days of a sign, I’ve been told, can exhibit traits of both signs, since you’re born on the “cusp” of those signs… where the planets are, like, transitioning?  I don’t study this stuff deeply, I’m only going on what I’ve been told.  So… as much as I can here, I’ll be using things here for both Capricorn and Aquarius – the sign that comes after mine, whom I was born on the ‘cusp’ of.

For consistency’s sake (read: laziness… lol) I’m going to be using the same website that Berry did, Astrology-Zodiac-Signs.Com, and I’m going to take information from their description of both Capricorn and Aquarius signs to answer the questions Berry posed in her post.

I was born on the cusp of Capricorn and Aquarius, technically the last day of Capricorn… I explained the astrological craziness behind that above (if you’re skimming and didn’t read it.)

2.) Do you believe in Astrology and read your horoscope often?

Honestly, I don’t read my horoscope very often.  But, with my obsessive Aspie personality, when someone makes a comment about something I do or say that turns into some manifestation of, “You’re such a Capricorn,” or “Are you sure you’re not a full-on Aquarius?” then I go on a Google dive into traits of my sign, and wind up applying a lot of these descriptions to my life.

Now, that said, a lot of the descriptions applied to these signs are very general… so it’s easier to see yourself in them if you’re even remotely that way.  These aren’t incredibly specific traits that you can be like, “Omg how did they know?!”  It’s sort of like Mediums saying that they’re getting a last name that begins with S… some of the most common American last names begin with S, such as Smith… so more times than not, they’re going to pick up on someone reacting, and be able to go probe further.

However, that doesn’t mean that trying to find some sense of belonging and understanding in these traits is a bad thing, if that’s what you need to do.  I have my moments where I need to see it in black-and-white to fully understand it and feel better about it.  Perhaps that’s just my personality, but don’t feel afraid to go look into it if you’re curious.

3.) What are some of the traits of your zodiac sign and do you feel they reflect who you are?

This is where it will get a little bit tricky with me using both Capricorn and Aquarius information, but I’m going to try my damnedest to label them properly so you can follow what I’m saying/answering/talking about.

While Berry only examined those 4 areas to ‘keep it short’ mine wound up being much longer than I intended.  Of course, part of that is because I was analyzing traits from two different signs in the third question… however, the other part of it is just because I’m long-winded.  But if you’ve been here for any length of time, you know that.  LOL.

Backdrop&Pose || Horrorfest Backdrops (Psychatric Hospital; Gold) | Astralia | The Epiphany | new!
– Edit: Cause I forgot to mention this, in the close up photo I used AnyPose to edit the right arm and bring it down, so the close up photo is not the original pose included with the backdrop.  The full body photo, however, is.