I taste you on my lips and I can’t get rid of you
So I damn your kiss and the awful things you do
Yeah, you’re worse than nicotine… 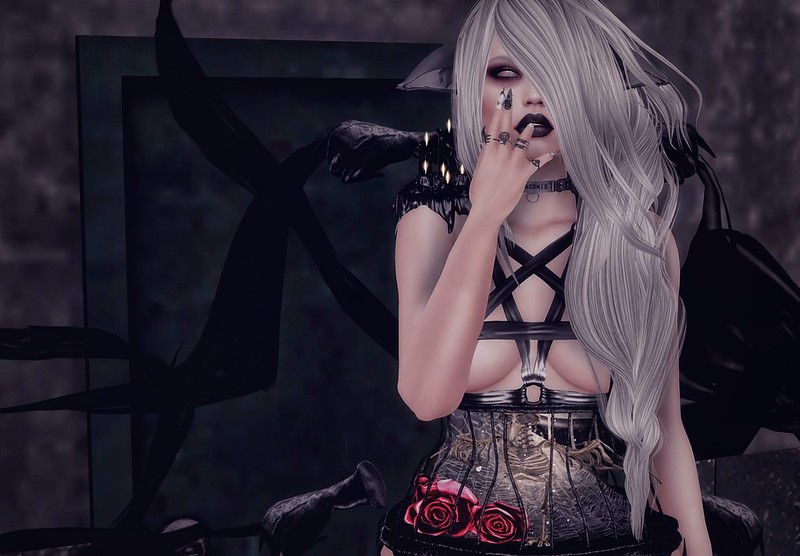 I’d apologize for my embracing the full-on creep-factor of October, but I’m not gonna.  Lol.

Honestly, I don’t even really get that into Halloween in RL, and I usually don’t in SL either… but honestly, it’s these damned eyes, eyeshadows, and lipsticks from Izzie’s in this Powder Pack.  I can’t get enough.  It inspires me to embrace my inner creepy bitch and push the boundaries of what I’m used to styling and posting.

On Monday, Strawberry Singh brought back her weekly – hopefully – blogger challenges that she had originally begun in 2013.  Though with this new incarnation, she’s not calling them Monday Memes, or blogger challenges, because she feels like she wants more of the grid to feel free and able to participate, more than just bloggers, so she’s calling them her #SecondLifeChallenge.  Because that’s what it is… a Challenge to the residents of Second Life.

You can read her blog post HERE for more information about the origins of the challenges and how they’re going to move forward from here on out.

The instructions for this first #SecondLifeChallenge back?  Appropriately reaching back to one of the first challenges she posed in 2013, Strawberry gave the following instructions: Share seven facts about your Second Life avatar or your SLife that may or may not be obvious to your readers/everyone.

My Second Life Fact #1: I can count on one hand how many times I have purchased lindens in the almost 9 years I’ve been on Second Life.

In the spirit of Strawberry, my first fact is pretty similar to hers, except she has NEVER bought lindens.  I have, but only a few times.  I’ve talked about this before a little bit here, but a lot of you are new to me in the past year or so and may not know.  Anything that I buy here in SL, any land that I rent, home that I have, event that I run and buy things for… it’s all done with my own lindens that I earn through working in SL.  I create items once in a blue moon and sell those occasionally, but lately those are only for charity events where I’m making 25% of the sale, sometimes 50%, but usually 0%.  Lol.  No, the lindens I have are from jobs that I work.

Now, the first thing people think about when it comes to people having alts is that they have them to do shady shit, cheat on partners, etc with.  Not the case here.  While I won’t name all 4 of them for you, I will tell you the purpose exactly that each one is for.  First, when I say ‘technically’ 4, I mean that there is a Tiviyah2 Resident out there that I made to hold groups and stuff if I needed it.  I totally had this plan that it would work out… I’d keep business groups and blogger groups on Tiviyah, and then everything else on Tiviyah2.  Except the problem with that is that most of the reason I would keep a store group – group gifts, special offers, etc – require you to be wearing the group tag.  So while I might get the notice about it on Tiviyah2, I wouldn’t be able to take advantage of it on Tiviyah like I wanted.  So that avi has since been abandoned and isn’t logged in too often.  I can’t remember the last time she was logged in, and I couldn’t tell you WHERE she would log in if I tried to log her in now.

Secondly, there’s the hunt avi, PeaceOnEarthHunt.  As I tried to explain to a designer yesterday evening, Tivi’s inventory is a MESS.  It’s 156k in items and none of them are organized.  Now, granted, my notecards folder is damn near impeccable… and most of my important stuff is kept track of through my Google Calendar and Google Sheets anyway… but the rest of my inventory outside my notecards folder is a nightmare.  To then try and run the Peace On Earth Hunt and keep all the associated notecards, landmarks, logos… it was just adding to the crazy, I couldn’t find things when I needed them, etc.  So I made the hunt avi.  I kept her notecards and objects and textures and such organized from Day 1… and so that is a much more peaceful (get it?) environment to work within when I’m having to take care of hunt stuff.  I know exactly where everything is, and can keep it all sorted.

The other two, one is a male avi that I used to throw into fashion shows when an additional male was needed.  Though I haven’t bothered to mesh him, beyond mesh hands, so he’s quickly become obsolete, and I can’t justify spending that many lindens to update him when he’s so rarely used.  The fourth is a female avatar that I used to use when I would be actively modeling but wanted to do auctions or other D/s and M/s related things… back when I was hiding that sort of thing from my ‘professional life’.  I would use the alt so I didn’t have to plaster what auction house I was hanging out at all over Tivi’s profile, but I was honest up front with anyone I got to know there that it was an alt, and who my main was.  After I stopped hiding, I stopped needing that alt, and so she sits pretty dormant too.

My Second Life Fact #3: Tiviyah is not my first avatar.

Sorta in line with Fact #2, Tiviyah is not my first avatar.  I said earlier that I’ve been in SL for almost 9 years now.  My very first avatar rezzed in-world in December of 2008, and has since been deleted, when I thought I was leaving SL for good.  We see how well that worked out.  Lol.

My Second Life Fact #4: I used to be actively learning how to live-mix when DJ’ing.

My father was a DJ in actual real life radio for a long time after college, and it was a huge passion of his.  So when I came into SL and saw a lot of people claiming to be DJ’s, I got super excited that I’d get to see some live work again.  I quickly learned that most who call themselves a DJ are just playing playlists… one song lined up after another… and was soon-after disappointed.  However, after a few years, I ran into my ex who was, admittedy, a pretty damn good live-mix DJ, and he started to teach me.  I never really got any good at it, because I wasn’t able to get my hands on actual hands-on tables, etc to try and expand a bit on what I was doing, but Virtual DJ became a fun little learning tool and I had a blast learning.

My Second Life Fact #5: Before I started blogging for skin stores, I hated the idea of changing my appearance too much in blog posts.

Like… I think it was the way that modeling beats into you, “Your face is your brand.”  I’d heard that particular catchphrase so many times that I was terrified to change my appearance too much in a blog post… I wouldn’t alter my shape… or my skin… or my hair color… I’d keep all that stuff the same and just put on different clothes.  Looking back on it now and comparing it to my posts now – photo quality aside – I think that is part of what made the photos in older posts so boring to take, work on, and probably look at as well.  It was just the same old thing.  Now, with some of the designers I work with, and with Powder Pack, I’m able to change it up so completely for each post if I want to… I love the ability to completely cater EVERYTHING about my avatar to the feel of the post I’m trying to convey.  It’s the freeing part of blogging, instead of modeling… at least for me it is.

My Second Life Fact #6: Prim babies freak me out.

Ok, so this is probably cheating, because I’m pretty sure you all know this about me… but the actual prim babies that people use after going through the SL-pregnancy thing… just freak me out.  Now, granted, with the addition of Black Bantum’s mesh babies and all their adorableness, I’m beginning to open up to the idea of THOSE… but the prim ones that people use as actual babies in family RP and such… I can’t do it.  I’ve tried.  I just can’t.  It freaks me out too much.  Maybe that means I’ll make a horrible RL mom some day, but like… I just can’t with the prim babies, I’m sorry.  Not knocking those of you that use them… a close friend I had a few years back had her daughter that was a prim baby/child/what-have-you… and I was ok with her doing her thing… I just usually wasn’t involved, because it freaked me out too much.

My Second Life Fact #7: I never saw myself being here this long.

When I first logged in that night… an 18 year old in my dorm room watching MTV’s Made and this girl wanted to be made into a singer, but spent most of her time in this virtual world called Second Life, and even invited some of her Second Life friends to come see her first real life performance… so I thought “Let’s check out this Second Life thing…” while I’m procrastinating studying for some Mechanical Engineering final I should’ve been prepping hard for… I would’ve laughed had you told me then that I’d still be here almost 9 years later.