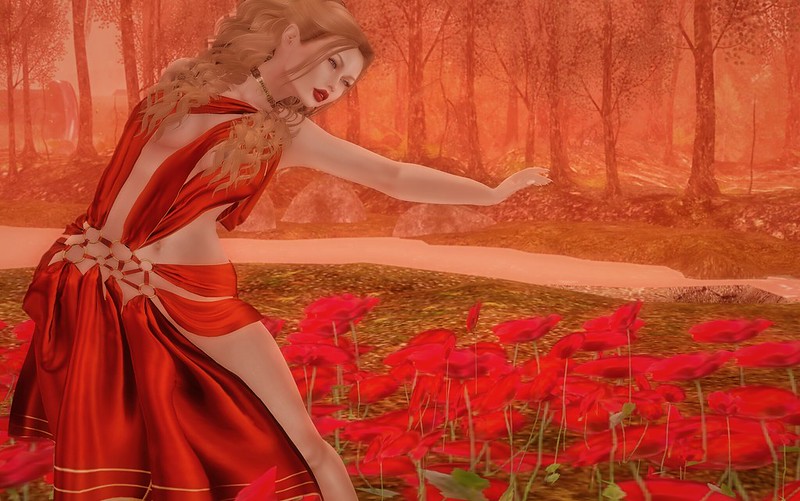 I was feeling super dance-y today.  One thing about being, like, outside of the pageant bullshit is that I don’t feel like I have to ‘hide’ this shit, or second-guess whether or not I should participate.  Because I’m my own person, not ‘owned’ by some organization, and the only other person’s opinion about my life that I have to give a fuck about is Master’s.  And He happens to support my dancing.  And my slavery.

Now, on a more positive note… lookit!  RunAway has heard our pleas for a longer version of the hair she released at the Cinderella round of Enchantment.  This particular hair, aptly named “Cindy” will be available at We ♥ RP tomorrow (October 4th).  I had been following the WIP post of this on Facebook, because I was in a curly mood yesterday, so I was stalking this particular release.  Imagine my surprise when I saw her post today and it was going to be a We ♥ RP release.  You can bet your ass I RAN to the blogger room to see if it was there, and squeed like an absolute fangirl when I found it.

The Cindy hair can be worn with the front bits over the left shoulder, right shoulder, both shoulders, or none of them, so I chose both because I couldn’t pick a side I liked more than the other.  The front fringe is a separate, unrigged mesh attachment that you can resize to fit any mesh head you wear, or you can choose to not wear the fringe at all and still have the hair.

Because I was dance-y, and I was already hanging around the We ♥ RP blogger room, I couldn’t pass up the Sweet Kajira silks that will also be offered for the October round that opens tomorrow (October 4th).  Silks have always been kinda my guilty pleasure, so I’m always up for adding a new set to my inventory and putting it out here.

I’ve been doing a lot of photos with Oranges and Yellows for hues and Hazes and stuff… but it’s not often that I try to do such intense things with reds, just because I don’t want it to look like aliens are landing or other ridiculous shit.  But after playing with one of Satomi’s windlights from FoxCity I managed to get these photos to come out the way I wanted them.

And as I post a close-up of this face, you’ll see another offering from the ForMax fundraising event to benefit Maxwell Graf.  This skin, these eyebrows, and the red lipstick are all three separate offerings from Alaskametro.  100% of sales from the skin will go to Max, and 75% of sales from the eyebrows and the lipsticks will go to Max as well.  As of this moment when I tp’d into the ForMax sim, the general donation box is sitting at L$75,500… and that’s not including any sales that have been made… that’s just generous donations made directly to Max.  This community truly is an amazing place.  ♥

Oh, and look, you can finally see a relatively clear shot of my engagement ring.  ♥