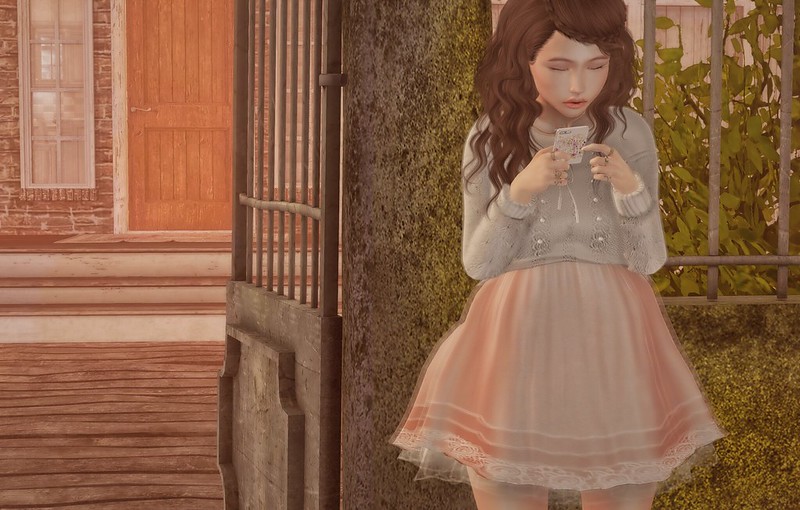 Oh, hello Catwa head, old friend.  It’s nice to see you.   I haven’t had you on in awhile.  But I just had to check out the new Catwa update for the Catya head.

And the ‘cutesy’ look looked better with this particularly adorable dress from Moon Amore.

In the era of social media, it’s super easy for you to act incredibly tough when you’re hiding behind a screen.  It’s really easy for people to try to use a makeshift, counterfeit ‘mob mentality’ to try and intimidate you into changing your opinion.  “Well me and all these other people think this… so you’re wrong.”  And you’ll never actually have any proof that there are any ‘other people’.  After awhile of believing all that stupid shit, I finally learned that 99 times out of 100, there are no ‘other people’ and this person is just using a bullying tactic to try and tear you down.

Sometimes this will surprise you from people, and other times it won’t.  Just learn to expect it from anyone, and you’ll never wind up surprised if and when it happens.  Sure, that’s a pretty cynical world-view… but at least you won’t get taken off guard, right?

We spend so much of our time trying to have these stupid arguments over the internet, and for what exactly?  Take the picture above.  I’m literally standing outside my home… the home I share with my Master… on my phone texting.  That’s how I have felt in certain situations at times.  Like I’m forsaking my time with Master, just to entertain some small-minded, ridiculous conversation.  I can’t tell you how many times I’ve found myself doing this, and I didn’t realize it until He was headed to bed and it dons on me that that was my entire evening with Him, down the drain, to spend time on something that didn’t deserve a passing thought.

So in this era of social media, anonymity, and an endless supply of new, cyber-based tactics to bully each other… just don’t waste your time on idiots who just want a response out of you.  9 times out of 10, you have all the proof you need that they are wrong and just coming at you out of some shade of jealousy, pettiness, or other bullshit.  So you don’t need to waste your time or your thoughts on it at all.

After all, numbers speak for themselves as a form of empirical data that can actually be measured.  ❤

Cellphone&Pose || Text Back Phone (Ugly But Lit) | e.marie | Kustom9 | new!
– The phone features a Priority 4 animation for your arms/hands that put you into a texting position, but leaves the legs and torso and other parts free so that you can still realistically stand and use it in conjunction with your AO.  I have seen screenshots of Men trying this phone, however, and it doesn’t seem to work, so play this gacha at your own risk, menfolk.  L$49 a pull!