Some nerve You have to break up my lonely
And tell me You want me
How dare You march into my heart
Oh, how rude of You to ruin my miserable
And tell me I’m beautiful… 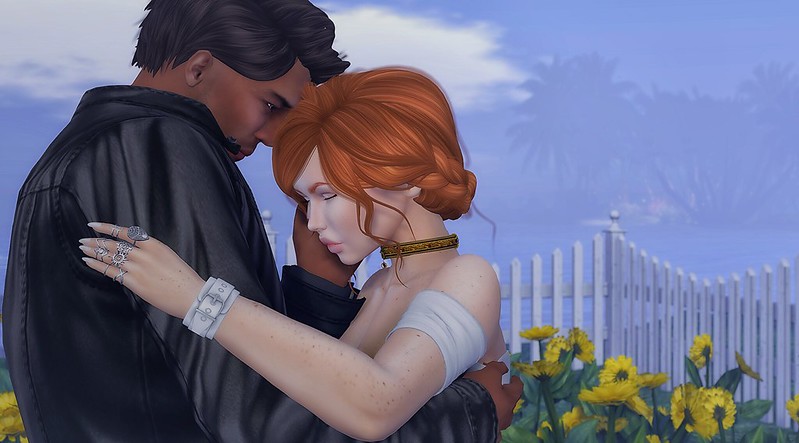 I figured what would be better photos on the first day of being even remotely locked down (cause let’s be honest, the first few days are light) than photos of Master and I.

No, but for real.  Someone asked me recently how we met, and I realized that I never really told that story here.  I just kinda hopped into, “Omg this guy is amazing.”

So here is an origin story for you.  ❤

I run around with SIN Tracker on at times.  Some of you I’ve seen on there… ya closet pervs!  Hai!  *Waves*  But anyway, Sin Tracker is a tool in SL to aid in kidnap style RP.  May not be your kink, and 98% of the time for me it isn’t either… but I was in a mood that night.  I busted out my old Sin Tracker, updated my ‘profile’ on it, turned it on, and headed into a bondage-themed sim to stand around all cute-like.

I think Master would agree, I was cute as shit!  😛

I noticed Him in the sim… but sneaker fucker that He is, I didn’t actually see Him tp in.  And He was far enough away from me that, in my mind, He must’ve been there before I got there.  I didn’t pay much attention to Him aside from perving His profile… because that’s what I do anywhere.

In His profile, He had a mention about if you have restraints on and leave your keys open to be taken, He would likely take your keys, you’d have a bit of fun, and then He would give you a good old-fashioned lecture on the dangers of leaving your keys open to anyone like that.  I got a good giggle out of this because I never leave my keys open.  I always double check before leaving the house that either I have my keys, or my Dominant – if I have one – has my keys.  Nothing is ever open when I’m out and about, even when Sin Tracker on.

As I’m getting that giggle about having my own keys, I see that he clicked on one of my restraints, no doubt to see if I’d left my keys open.  I didn’t.

Now, He tells me that when He clicked on my restraints, He had my IM box open and He was about to start typing to me when it told Him that I started typing.  And He’s over there thinking, “Fuck, she has one of those click trackers on that tells her when people click her stuff.”  Indeed, I did.

I messaged Him something about how He didn’t have to give me a lecture about leaving my keys open… as I made sure that they were not before coming into the sim.  We had some witty banter, we went elsewhere and had a scene, and things just began to progress from there.

I was incredibly impressed with Him from that first scene because He was the first Dominant in 8 1/2 years to actually pay attention to my curiosity for Pony play.  No one else had bothered to explore it at all with me.  He, while He admitted later to not being experienced in it at all really, picked up on subtle clues, and that was our first scene… some basic training.  It wasn’t sexual at all… just training.  And that alone endeared me to Him in a very different way.

He cared.  He paid attention.  And He wanted more than just to fuck me.

What I didn’t know is that He actually HAD come into that first sim after I did, and He was there specifically to stalk me from the Sin Tracker HUD.  Lol.  So we likely would’ve wound up in a scene anyway.  But this way just… I don’t know.  It formed a crazy connection, and one that I’m very glad for.

And now, here we are, about to make this transition into a full collar… permanent, using the welder with the Heartcore plugin – something I’ve never done before.

Shape || Mine
Head || Chloe Bento Head (v2.7) | Lelutka
Skin || Yulia (T3; Shell) | Lumae
* Hair || Char (Gingers) | Truth Hair
– This hair is a former VIP group gift hair from back in February 2017.  This hair is still available to purchase as a fatpack for VIP group members in the mainstore, with the rest of the past VIP hair.
Body || Lara Body (v4.1) | Maitreya
Top || Babe Top (White) | Blueberry
Collar || My Heart Is Caged (Etched Fire) | Tethered
Wrist Cuffs || Vixen Training Set | Real Restraint
– I don’t advocate purchasing this set just because they look pretty.  There are some very strong things these cuffs can do if RLV is enabled in your viewer, and I will not be held responsible if you choose to play around with these unsafely.  If you do, however, and you’re in Firestorm, go to Advanced, and scroll down to the bottom of that window to uncheck “RestrainedLove API”, then you can relog and undo whatever you got yourself into.
* Rings || Lali (Hand Only) | Voluptas Virtualis | The Liaison Collaborative | new!
– Just like the Karen set in past posts, Lali has both rings and bracelets, available as a full linked attachment, as well as separately.  In this post, I’m wearing only the hand attachment, which features the rings.