Just slow down, if You want me
A man wants to be approached cool and romantically
I’ve got needs, just like You
And if the conversation’s good
Vibrations through and through… 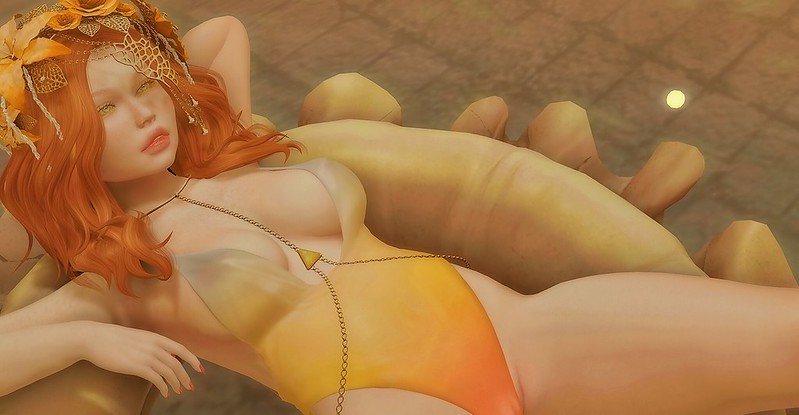 Today is a one picture day.  I’m not really sorry.  Lol.  I was just inspired for this one… and it shows everything I needed it to.  So, yeah…

Anyway!  I promised you guys when I was accepted as a blogger for Aisling and Voluptas Virtualis that I would tell you the story about how Aisling is the reason I’m as addicted to Gachas as I am.  The time has come for that story!

I don’t even remember how I heard about the event.  I wasn’t in Gor at the time, so it wasn’t there… maybe I was perusing blogs that day, I’m not really sure.  But I randomly came across The Secret Affair event, and their theme was Game of Thrones.

Anyway, I had noooo idea what a ‘gacha’ was.  I was just looking around at things and camming in on the ad photos to see if I liked something.  I didn’t seem much that was ‘me’, but, again I wasn’t in Gor at the time… so I wasn’t really looking for Game of Thrones-y type things.  All of the creators were producing high quality items, they just weren’t my style at the moment.

That was until I ran across Aisling’s “Lady of High Garden” gacha set.

When I say I didn’t know I had a love of intricate metal jewelry until that very moment… I mean it.  Even in Gor when I played a dancer – cause I WAS a dancer OOCly… lol – and could get away with more adornments than most, I didn’t really know how much I loved intricate, ornate jewelry until I saw this particular gacha set.  Most notably, the headpiece I’m wearing in this post.

I didn’t see a place to buy the pieces individually, but when I hovered over the ad photo (that was on top of a machine… but I figured that was just advertising… I had no idea what it was), I got the ‘Buy’ hovertip, so I clicked.  It should’ve been my first clue that it was so cheap… I remember thinking, “THIS WHOLE SET OF JEWELRY FOR __ LINDENS?!”  (I don’t remember what the pull price of this machine was.  Maybe L$50?)  But I payed the pull price and got some set of bracers or something.  And that was it.

I was SUPER confused.  Like… where was my headpiece?  I clicked again, and got bracers or something, but in a different color.  By the third or fourth click, I realized what was going on, I re-read the ad and saw that the headpiece was “UltraRare”, whatever that meant, so I kept clicking.

Now, I spent an embarrassing amount of lindens on getting that full set… all the black pieces, all the silver ones, all the gold ones, the Rare Necklace, the Rare Shoulder pieces, and the UltraRare headpiece… but believe it or not, while I only got one copy of the necklace and the shoulders, by the time I finished my full set, I had, like, 6 copies of this headpiece.  Lol.

I didn’t really know about people re-selling their extras on marketplace or in gacha yardsales, so I gave a couple of them away to friends, and didn’t understand why they were so shocked that I just gave them an UltraRare.

I was so gacha-ignorant… lol.

But from that moment, not only was I addicted to gacha, but I was addicted to Aisling.  I’d never heard of them before that moment, and after that I started looking for them eeeeeeeverywhere, in every event I could find, especially the fantasy events, cause that’s where they seemed to stay.

Fast-forward three years later, and here I am, blessed enough that these creators trust me as a member of their blogger team.  I could not be happier.

Even if it is all their fault I’m a bit of a gacha addict now.

Shape || Mine
Head || Chloe Head (v2.7) | Lelutka
* Skin || HanByeol (Bare; Freckles; Tone 104) | Mudskin | Powder Pack for Lelutka (June) | recent!
Eyes || Tokyo Eyes (Pales) | Izzie’s
* Eye Makeup || Sylvie Eyemakeup | Zibska | Powder Pack for Lelutka (June) | recent!
* Hair || Taren (Redhead) | Truth Hair | Uber | new!
– This hair actually is sold with a version that has a hat, which is kinda the main selling point of this hair.  Lol.  I just used the non-hat version because the headpiece was important to the story of this blog.  You’ll likely see this hair re-appear in another post in the near future with the hat.
Body || Lara Body (v4.1) | Maitreya
* Outfit&Chain || Tegan | Voluptas Virtualis | recent!
Headpiece || LadyOfHighGarden Headpiece (UltraRare) | Aisling
– This is an ollllllld gacha.  It may or may not still be in the store, but it’s from 2014.

– Pose used was included in the pool float, which was a part of the decor at Elysion. –