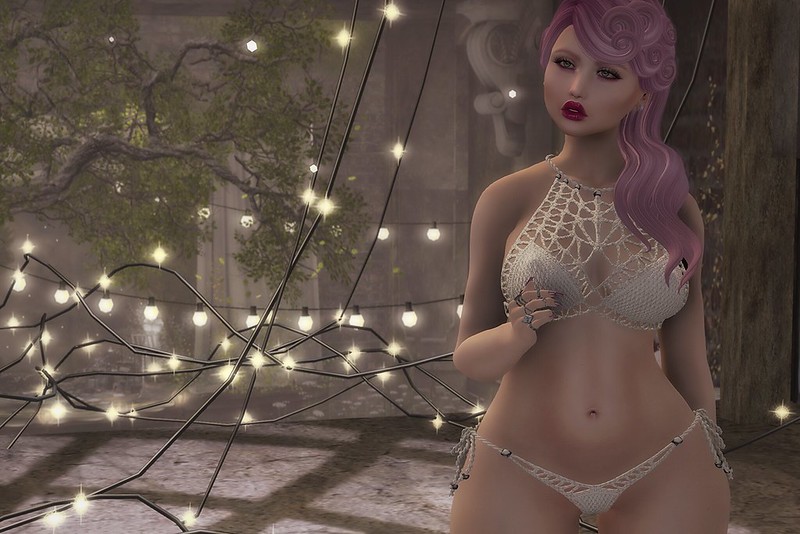 I was told in a discussion earlier that a different color of this makeup I was wearing made me look like Effie Trinket from Hunger Games?  I’ve admittedly never read the books or seen the movies (*ducks*), so I had to Google her and decided to adjust the makeup accordingly to make the look a little more true to her.

For someone who hasn’t seen it, I’d like to think I did decently.  And it was a fun way to give this styling a sense of purpose, aside from “These are all pretty things!”

The post I made yesterday was about how I don’t really feel like I fit in anywhere in SL… and while that might be true sometimes, I suppose my particular feelings lately are about not fitting into a PARTICULAR place.

Have you ever been in a group of people, trying to contribute productively to whatever end-goal you have, but because you’re new… or different than a collective majority of the group… or generally quiet most of the time… when you DO speak up, you find you’re not heard?

Have you ever felt like your presence wasn’t valued in a particular group?

That’s kinda the vibe I’ve been getting for the last 7 months or so.  Down to being regularly underestimated that I don’t contribute/don’t know how to contribute just because I’m generally quiet about a particular topic.  Yet, if anyone – aside from one person – had bothered to ask, they’d know it’s because I don’t support a particular group of people in SL, based on past experience… but that I was participating because it was ‘required’ of me.  However, that past experience means I DO know what I’m doing… I just choose not to do it very often.

But what got to me the most… was that contributions or attempted contributions were repeatedly ignored… and then in the same breath, people would get preachy about doing our part, and that it can’t be the same people.

Did you ever think that maybe it’s the same people because you act like the rest of us aren’t there?

I will bend over backwards and devote every spare bit of time in SL that I have to a group of people or a cause, if I believe in it and if I’m a valued member of the group/team.  The keywords there are “if I’m a valued member”.  If you’re going to piss all over my contribution and then preach at me to do more… I don’t have the time to waste on ungrateful people.

But that doesn’t mean that I don’t want to fit in with a group of the RIGHT people.  *Shrugs*  Maybe that just doesn’t exist.  Too much of a pipe dream, or something.

Blogging Tune || “The Way I Are (Dance With Somebody)” – Bebe Rexha ft. Lil Wayne