So I’ll get the lights, and You lock the doors
We ain’t leaving this room til we both feel more
Don’t walk away, don’t roll Your eyes
They say love is pain.
Well, darling, let’s hurt tonight… 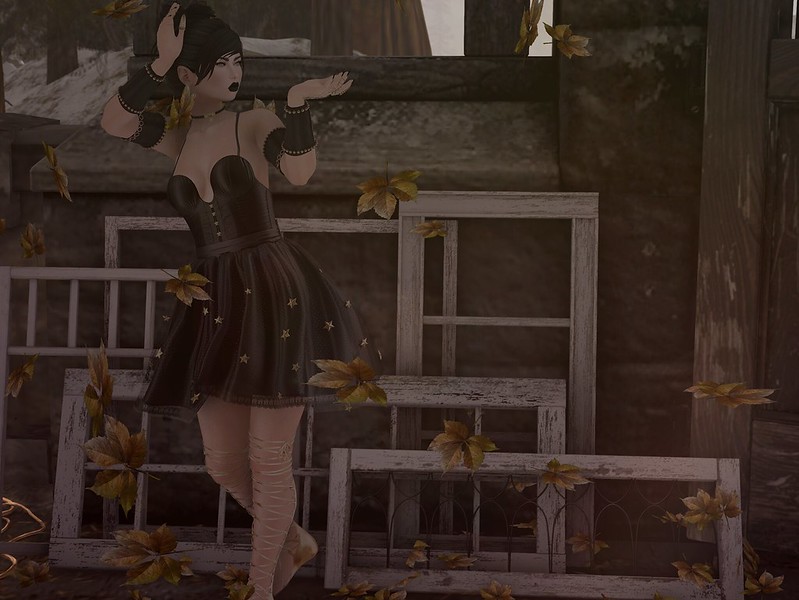 This isn’t exactly the most festive of outfits.  My apologies for that.  I did get the gorgeous bracelets/armlets/rings featured above in a blogger pack from Promagic, so I wanted something I could pair with them.  However, I’m just not exactly in the most festive mood today.

For the better part of several months now, I’ve been on this emotional rollercoaster with my RL family.  My step-dad has been in pain.  He has a bad back… so at first we thought nothing of it.  But then it didn’t go away.  He started getting sick… and his symptoms manifested like gallbladder symptoms, so we still didn’t worry too much.  He just needs a HIDA scan and to probably schedule gallbladder surgery.  No biggie.  We’ve had a surgeon down here do mine… but then all the tests started coming back negative and normal.  Then the doctor refused to run more tests and just wanted to ‘wait until his regular six month check-up’.  Meanwhile my step-dad was still in unmanaged pain.  So clearly this wasn’t acceptable.  He was taken to the ER, and was sent home with information about Pancreatic Cancer.  My mother fell apart.  His daughters fell apart.  His sisters fell apart.  He was sent to see a GI Specialist who ordered a biopsy, and it came back negative… no cancer.  But he didn’t trust it.  So he ordered another one, and sent my step-dad to see a Pancreatic specialist.  That specialist read the biopsy the same way… no cancer.  But there’s an autoimmune disease that mimicks Pancreatic Cancer symptoms.  Said he would run those tests.  Those came back negative.  Instead, they found Lymphoma.  Sent my step-dad to an Oncologist.  Oncologist says the sample isn’t good enough for him to confirm the diagnosis, or tell us what type of Lymphoma, or stage it.  Needs a PET scan and to consult with the Tumor Board.  PET scan comes back negative, thank god.  So the cancer (if it’s cancer) has not spread.  Oncologist warns that if the Tumor Board needs more tissue, the only way is to get it laproscopically.  Promised he would call Thursday after the meeting.

The doctor called this afternoon.  (You’re seeing this Friday, but I’m writing it Thursday.)

The Tumor Board has determined that they need more tissue.  However, rather than getting it laproscopically, they’re going to try a CT-guided biopsy.  One of the surgeons on the Tumor Board believes he can get the necessary tissue that way.

I mean… I guess that’s a good thing, because it’s less invasive.  But we’ve already had so many tests that were supposed to be the ‘end of the road’ and finally lead to a diagnosis… only to send us in a different direction.  If getting the tissue laproscopically will DEFINITELY get them enough to finally diagnose and stage him… and a CT-guided biopsy MIGHT… then shouldn’t we prefer the laproscopy?

I know that CT-guided biopsies are less invasive.  But I think I’d prefer the more-invasive method… rather than trying the CT-guided biopsy… having them STILL not have enough tissue, and ending up needing to do it laproscopically anyway, which then prolongs this whole process even MORE.

I just want them to finally give us answers, and a plan of treatment.  Before it gets worse.  The PET scan coming back and telling us that it hasn’t spread anywhere else is good… but I don’t want to risk giving it more time to do so.

I’d just like my family to be able to piece itself back together.  Is that too much to ask?  It’s almost Christmas for god’s sake…