Let me tell You what I wish I’d known
When I was young and dreamed of glory…
You have no control
Who lives, who dies, who tells your story… 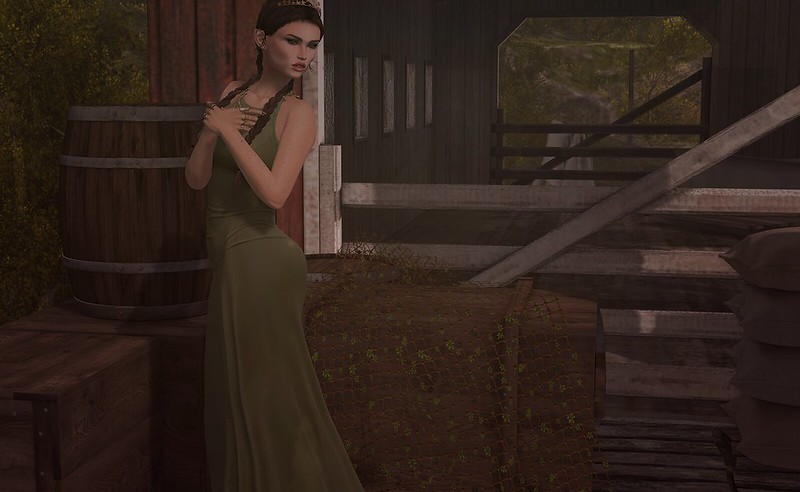 When I don’t know what else to do, I blog.

Almost four years ago now, I joined my first “modeling” class in SL.  Do I regret the first “school” I went to?  Damn right I do.  -laughs-  But it was a free thing, and I wasn’t sure how serious I was about it, so I figured I’d pop through a few classes, see what was going on, and go from there.  The attitude that I received from the people that were supposed to be my instructors turned me off from the modeling world completely and almost immediately.

But still somehow, I had seen an advertisement for a “pageant” (that shall not be named, but I use the term ‘pageant’ loosely) and I figured why not.  They advertised that emphasis will be placed on uniqueness.  Being who you are, rather than the carbon-copy of RL pageant girls you see running around.  I figured what a better place to start to try to get involved.  I couldn’t be a carbon-copy of a pageant girl if I barely knew what I was doing, right?

That experience was horrible as well.  The unprofessionalism of the man who ran it, the way he treated everyone… from girls involved to staff he’d retained… it was a nightmare, and several of us ran screaming the other way when all was said and done.

That was it.  I was done.  More trouble than it’s worth, I thought.  And then I met Reign Congrejo and Sequoia Nightfire.

I’d done a promo video thing for the Miss Colour of Couture pageant that year, and through that experience I was inspired enough to audition for the /actual/ Miss Colour of Couture pageant.  Did I make it in?  Oh god no, I had no idea what I was doing, remember?  -laughs-  I was still a fresh little noob to the modeling world and had not the slightest clue.  But I worked, and I was determined.

The next year, I put in a different photo for every round of the Miss Virtual World audition submissions and was called in for an audition on the LAST round.  Now granted, there were like 60 of us walking for maybe 5 or 6 spots, or some equally ridiculous ratio so I knew pretty much from the moment I arrived that it wasn’t my year – but that didn’t stop my noobish little heart from getting broken when they LIVE ANNOUNCED who the final candidates were that year.

I did, however, make some friends along the way and manage to cheer them on.  That was Anjelica Carling’s year.

Afterwards is when the pageant changed hands and I sat out a year to see how that was all going to happen.  I watched as it became Eleseren Brianna’s year and sat on the sidelines to observe carefully.  It was time to try again, I determined.  And so I put in for Miss Virtual World the next year and not only was I called in for an audition, I actually made it in.

By now you all know how the elimination process went for MVW last year, and I was left feeling empty.  That wasn’t the fault of anyone, and it wasn’t a negative thing.  We all knew going in what the process would be like that year and we all knew that we could potentially be eliminated at that halfway mark, but actually going through it was an entirely different story.  I was left with a half-fulfilled feeling, like I didn’t get a “true” MVW experience.

I’ve said this stuff before.  Surely you all know my heart on this by now.

So I was determined to try again this year.  My dumbass missed the first live audition, so when I was called in to the second one it was like… no pressure or anything, but if you don’t make this, you’re out until next year.  -laughs-  I was terrified the entire time I styled for that audition… terrified as I sat backstage (because of course, as a name beginning with a T, I was doomed to walk last)… terrified as I waited that night to know how the auditions came out.  But despite all of that fear, I read the list and I had made it in for the second year.

This time, I was MISS V ♛ SWITZERLAND 2017.  And while “Switzerland” was an inside joke between my friends and I, I was both thrilled and honored.

The journey has only just begun, and sadly – despite my determination for a true start-to-finish experience this year… they aren’t eliminating anyone… I have had to bow out.  It seems the universe is rather rudely placing things in my way that are interfering too much with my ability to truly focus my energy as much as it would need to be focused for an experience like this.  Already, I’ve had a few hang-ups with things missed and while it wasn’t anything I could control, it also wasn’t the organization’s fault, and yet they have had to ‘suffer’ as a result.  A styling card turned in late, a rehearsal missed… that’s not fair to MVW as a whole, nor to the other ladies that I was beginning to walk alongside.  And so I bowed out.  Gracefully, I’d like to think.

Am I sad that I won’t get to finish this year?  Devastated.  I suppose there’s always next year.  And until then, I can wear this little crown from Blueberry and pretend I went as far as I would’ve liked to.  One can dream, right?

..:: Blogging Tune ::..  “Who Lives, Who Dies, Who Tells Your Story” – Original Broadway Cast of Hamilton