I’m really gonna try to be nice today.  I apologize in advance if that fails.

*** EDITED OUT ranty paragraph…. because everyone says stuff in the heat of the moment when they’re angry.  Doesn’t mean it has to stay there. ***

Alright.  Now that that’s over with.

It’s come to my attention that a few rumors have begun regarding a few things about me.  Let’s see if I can put those to rest, mmkay?

1.) No… doing the Colour of Couture finale bald was not a sympathy ploy.  It was a challenge for me… (*le gasp*  Challenging myself for a style challenge!  Never!) And it was the fulfillment of my Bid Me Bald time of 9 days, of which the CoC Finale was the 8th.  Did I purposely set a linden goal that would’ve had me bald for 8 days?  Yes.  My goal was to raise L$40,000 personally, in my kiosk, during Bid Me Bald.  And the ending total in my kiosk was L$40,501.  BUT… did I do it SPECIFICALLY for a “sympathy vote” from judges because I did both my finale stylings bald?  Hell no.  Charity is far more important to me than pixel-peoples’ opinions of me.  Come on now folks, you should know this by now.

2.) Honestly… I’m too fogged from meds to remember what the other rumor was that I wanted to address.  There’s still that ‘caring about cancer patients’ thing from the mouth of a designer that doesn’t seem to think before they speak… but I solved that problem simply by leaving their blogger group and refusing to support them.  *Chuckles*  Simple!  Problem solved!

I will just continue to exist in my little bubble here… bouncing around the grid in the company of some pretty awesome people who can accept me for who I am.

Getting rid of the toxicity in my life last week was extremely refreshing.  I’ve never been so low on groups before (by the time I was done purging, I was only a member of 27 out of 42 groups… just, damn!)  I’ve got time to organize another dance competition, this one in support of Relay for Life.  I can work on my dance for Design N Dance in peace.  I can just generally exist in a positive environment and not be so stressed out all the time.

It’s pretty amazing that as “harsh” as Gor is, I find my solace here.  It’s the fashion community that was harsher than any Gorean city/village I’ve ever been in.  So, good riddance!  And bring on the roleplay!

Oh, and the fighting.  That’s pretty fun too.  I fully admit to being trigger-happy… errr… well… blowgun/slingshot-happy.

Will have more tales of my adventures in Gor soon!

Poses: various from the Rinoa set from PosESioN

Location: Home of the Unknown
* not linking it because this is a fully in-character Gorean roleplay sim… not a photo sim or somewhere you can just pop into!

One thought on “Despite The Things I Give…” 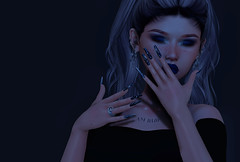