Skip to content
(Featuring designs by Poptart, SLX, TRUTH Hair, and many more…)

(Take note, this is what I’m doing when I should be furnishing my house… you’ll see my lack of work in other pictures…)
Quick!  No one in the dance world has made an ass of themselves in the last 24 hours.  Let’s make another fashion post and keep the momentum going!
No, but for serious.  This is ideally what I’d like to do.  Post daily.  Normally at night before I go to bed, because that’s when I seem to find enough down time to do something like this, uninterrupted.  But because I’m too tired at this point to do any heavy research, so I tend to add the SLURLs for the stores in the morning.  Then again, I could be like most bloggers and make you find it yourself, from the credits… haha.  But I try to be a bit nicer than most.
Speaking of other bloggers, the syndication process has been interesting. 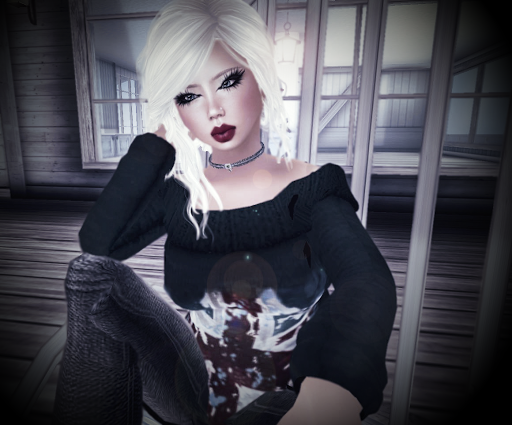 (Please note my house in the background… and please also note that there is no furniture in it… I think I put the thing up, like, a week ago…)
In my quest to become a syndicated blogger and be taken seriously, I find my journey starting out slowly, but not altogether unsuccessful.  So far, I’ve found myself syndicated on 3 feeds, which, from what I hear is pretty good.  While I’ve been searching the various feeds, though, I’ve found a very diverse opinion of what is considered “the best” or “high quality”.
All of these feeds claim that they only post “high quality” blogs, and that the bloggers that contribute to them are “only the best”, however the types of bloggers and the types of posts that I see very GREATLY.  This is not a bad thing, as I appreciate, and even practice, various styles of writing and blogging myself… but it feels like, once more, there’s no set standard, so some people are left off of some feeds simply because they don’t conform to someone else’s idea of “the best”.
One example I can think of off the top of my head is a feed that I believe I was drawn to on three separate occasions.  (Yeah, my memory sucks and I couldn’t remember that I’d already ruled it out.)  This feed claims that it will only public ‘high quality’ blogs, which it defines as quality clothing, edited photos, and “tight posts” which is basically just the photos and the credits, with very little wording in between.
That’s all find and dandy… and it’s great for people who come to these blogs just to see pretty pictures of outfits they can spend their lindens to recreate, rather than expressing their own UNIQUE sense of style… but for those of us who are writers, it kinda sucks.
I find it amusing as well, because the definition of what a blog is, according to Dictionary.Com, is:

“a Web site containing the writer’s or group of writers’ own experiences, observations, opinions, etc., and often having images and links to other Web sites.“

See, from the dictionary definition of blogging, you seem to get the idea that there should be writing involved, yes?  And that the inner-writer in all of us would be embraced, rather than discouraged, right?  There is a time and a place for ‘photo-only’ blogs… but I would call that more of a photo album than a blog.

At the same time, do I believe that EVERY post should be a novel?  Oh hell to the no.  I think we’d all get bored reading it, let alone those of us who write it.  We’d eventually run out of ideas.  There are only so many things to talk about… even with the stupidity of the people around us to rant about occasionally. 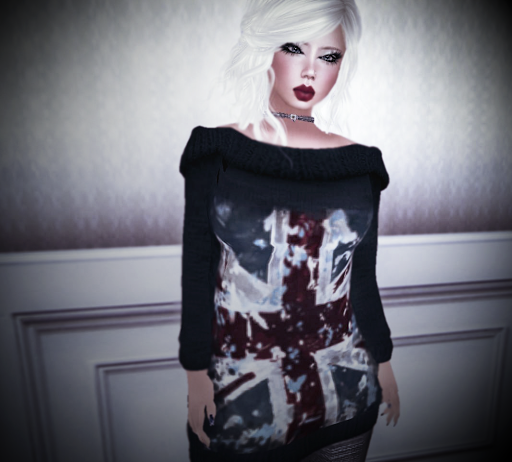 (Before anyone asks, no, I’m not British. My partner is… and I figured he’d appreciate this sweater when He logs in while I’m sleeping.  Haha!)
So at this point, I guess I should just chalk it up to another mini moral crisis in my life inspired by the fashion world in SL… but it’s starting to irk me that it occurs so often.  In a virtual world that people come to for their own reasons, and they expect people to not only accept them for how they choose to represent themselves… but they also expect everyone to accept their reasons for being here, their personal limitations, what they want to get out of being here, and they expect everyone to condone their actions and words in the name of individuality and freedom of speech… you’d think in a virtual world like this, that there would be LESS judgment than in the real world.
But shockingly enough, I’m beginning to find that there’s more.
And the biggest issue that I have with this is that it’s not just judgment.  It’s people walking around beating their chests like Tarzan (or I guess Xena the Warrior Princess may be an appropriate female reference) and being ‘loud and proud’ about their choices in SL, their reasons for being here, etc… everything that I mentioned before.  They boast and brag and expect everyone to be ok with them because they are who they are… and they get pissed if anyone dares judge them.  But THEN, they turn around and harshly judge the people they share this medium with.  I’m even guilty of it myself.  But the difference here is that I see that I’ve done it, and I watch other people do it and it BOTHERS me.  There are plenty of people walking around SL (or driving their pixels around SL, as the case may be) who are being completely two-faced in regards to being open and accepting.
So once again, I’m forced to choose… do I try and “tighten” up my posts to appeal to more fashion feeds that don’t want as much text… even though true blogging is about WRITING?  Or do I flip them the bird, continue to write what I see fit, and post the pictures in between, making an altogether cohesive blend of fashion and my own thoughts, in my own little corner of cyber space?
I’ll bet from the length of this post, you can tell which on I chose.  🙂

(Yes, that is an anchor in my house… and no, I didn’t put it there in an effort to put SOME kind of furniture or decor in there… it actually came with the house… I’m hopeless.)
*~* You’ve Gotta Get Up And Try *~*
(You know the deal.  I’ll post SLURLs tomorrow.  Love you all.)